Paradise ponders, filling station, fuzzy eyeballs, and giant wrench edition...  Yesterday was another really busy day around the place.  I got dragged away from my own projects several times to help the guys working on our “filling station”.   There were decisions to make, some education on how the components worked, tools to lend, and hardware to scrounge for.

In the first photo below, Joe is using a fancy core drill (with a water-cooled diamond bit!) to drill holes through the back wall of the filling station.  These holes allow the two pieces of 1" black iron pipe through the wall.  I'll be grouting them later to make them water-tight.  One of the pipes is for gasoline, the other for diesel.  The second photo shows the inside of the filling station, with most of the plumbing done.  The fuel comes in through the pipes on the bottom, then on each leg (for each fuel) goes through a shutoff valve, a filter/water separator, and a gauge.  The pipes on top will be extended toward the opening, where a swiveled hose with a nozzle will be attached.  The other end of the pipes is currently just open underneath the tanks; there's a bit of plumbing left to get done there, too.  But look at all that lovely progress!  I think that by next week I should be calling the local petroleum distributor to order me up some fuel.  Woo hoo! 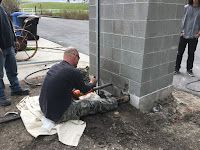 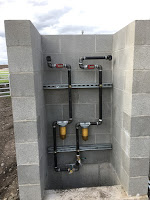 Yesterday Debbie and I took a jaunt up to our optometrist to pick up her reworked new glasses.  The first time we got them she was getting headaches when wearing them.  When we took them back, we discovered that the optometrist had made a prescription mistake.  He wrote it as 53° axis (for astigmatism), but it was supposed to be 153°!  They immediately ordered new lenses for her, and yesterday we got them.  Her first reaction: she couldn't see well at distance.  Now she's got to wear them for a week to see if her eyeballs will relax so she can see well with them.  If not, it's back to the optometrist we go – for round three! Mark T. was here yesterday to finish up putting the risers.  There was a bit of a holdup, though, as he was trying to remove our old aluminum riser heads from the PVC pipe that holds them.  The pipe is thick-walled 3" ID PVC, male threaded, and the riser screws onto the pipe.  Well, these old riser heads had been in place for 20 years or so, and they weren't going to come off easily.  Mark only had one pipe wrench big enough to grip them, and that one just barely.  So I grabbed my giant water pump wrench, which has jaw that open to 5" (commercial photo at right).  I don't often need something that big, but when I do it's really hard to beat this thing.  It's got gripping power every bit as good as a conventional pipe wrench, but it's much easier to use.  Mark and I got those things apart in no time. :)
Posted by Unknown at (permalink) 8:31 AM