Paradise ponders, boring meeting, giant valve, and blackened wood edition...  Last night was the annual shareholders' meeting of the Paradise Irrigation company.  I've attended the past two meetings, both of them interesting mainly because there were some controversial issues to deal with.  Last night's meeting was about as routine and boring as such a meeting can be, mainly because (a) Porcupine Reservoir, the source of our irrigation water, is already overflowing with much more water to come when the snow melts, and (b) the finances of the company were in far better shape than they were last year.  Our Board members were all re-elected by acclamation, so even the voting was boring.  The meeting was over in about 30 minutes. 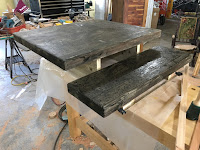 On Wednesday evening I applied the first coat of the finish on the stairs.  It did not go as expected, nor as my one past experience went.  This coat is a dark grey that I intended to have lodge in all the dents to highlight them.  I expected to be able to just wipe it off the flat surfaces, like the similar product I've used in the past.  From the first moment I wiped it onto the wood it was obvious that this product was more like a stain, soaking into the flat surfaces.  Once I'd made the first wipe, though, I was committed – whatever I did needed to be done over the entire surface.  So I wiped it on everywhere, with the result you see at right.  Yikes!  When I was done, I figured out what happened.  Being the dummy that I am, I assumed this product was similar to the one I'd used in the past, and I didn't read the instructions.  Had I done so, I'd have noticed that you're supposed to apply this product only after you've sealed the wood.  In other words, this stuff was supposed to go on as a second coat, not the first coat.  Dang it!  I'm going to have a lot of sanding to do to get rid of this, as black stairs are the last thing we want.  Hopefully the dark color will remain in the dents after I sand it, so the end result may be just fine anyway – just a lot more work than I'd expected!

Mark T. and Dave were here all day yesterday.  One of the things they did was to start the installation of a gigantic gate valve.  In the first photo below you can see how they cut a hole in the existing 6" water pipe.  Note that the irrigation system is empty all winter, and won't be pressurized for several weeks yet.  That's why they can work on it now without causing geysers.  :)  In the second photo you see the valve body (the red part) before they installed it.  The last photo shows Mark in the process of installing it, and there you can get a good idea of the scale of this beast.  They're all done with the installation except for the step of torquing down the bolts on the various pieces (about 40 bolts in all).  The bolts and nuts on the valve required a 1 1/8" socket (huge!) and will be torqued to 50 ft/lbs.  Mark's bringing the required tools today, and then our shiny, new, gigantic valve will be complete.  They'll be filling in the hole, and installing a vertical pipe that will let us use a “key” to turn the valve on and off.  This will make the valve nearly invisible, especially since the vertical pipe's upper end will be hidden by our willow tree's trunk.  This will give us the ability to shut off the water supply to just Tim and myself, so that when we (inevitably) break a riser or dig through a pipe, we can shut off just us and not our neighbors. 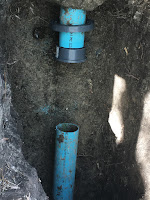 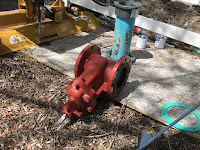 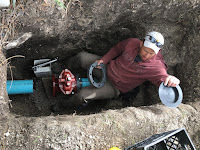 Posted by Unknown at (permalink) 5:23 AM