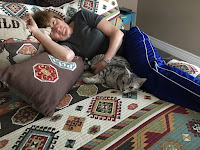 Paradise ponders ... Debbie and her cat edition...  Yesterday afternoon I brought firewood in and laid a fire, thinking Debbie (who's still in the throes of some evil virus) would like it.  I got it going nicely and then went into the bedroom where she was napping to roust her.  The sight at right greeted me.  That cat is Jahar, our Savannah cat – and he owns Debbie.  He just barely tolerates me, and then only on special occasions.  She went back to napping, and didn't come out to enjoy the fire for a couple of hours. :) 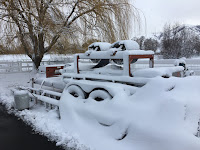 Yesterday evening we had terrific gusty winds and fairly heavy snowfall.  The snow was of the wet, gloppy kind.  With all the wind, the accumulation was variable: zero in some places, but over a foot in others.  The photo at left is a metal-bending machine (for roofing panels) parked near our house.  The tarp protecting it tore and blew off, and the machine (as you can see) is pretty well stuffed with snow and ice.

Around 8 pm, our power and cable Internet connections simultaneously died.  Our backup generators kicked in within a few seconds – and ran constantly for the next five and a half hours.  The outage that got us also took out the entire southern section of Cache Valley, 1,000 or so homes and businesses.  That was just one of over 50 outages suffered along the Wasatch Mountains front at roughly the same time.  The snowy and icy road conditions meant quite a few accidents, and some of those were collisions with poles.  The wind meant quite a few downed trees, and some of those took out power, telephone, and cable lines.  I'm not sure which failure mode we experienced, but the repair time was long because the power company's crews were stretched to the limit.  Our general experience is that we're back up within an hour or two; this was much longer than that.  After the power was off for an hour or so, I poked my head out our front door and back door, to look around at the valley.  Other than at our house, there wasn't a light in sight – total darkness prevailed.  Apparently we have the only backup generator within a couple of miles.  After last night's experience, at least one of my neighbors is suddenly very interested. :)  We were very grateful ourselves, as we didn't have to worry about getting cold, losing the food in our freezer, or even being slightly inconvenienced.  Everything just worked.  If my memory serves me right, this is the fifth outage we've had (and by far the longest one) since installing the generators.  The decision to spend the money on them is feeling pretty good right about now...

Posted by Unknown at (permalink) 9:41 AM