Paradise ponders, superstar mutts edition...  So I took a few quick photos of Mako and Cabo to assuage the demon readers who are pestering me about them.  Here are the superstars: 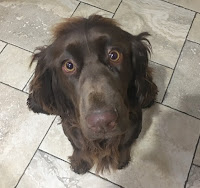 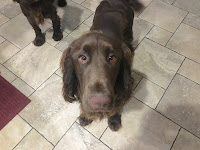 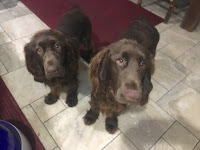 I took these before the sun rose, which is why they aren't as crisp as you'd expect.  The first one is Cabo, the little girl.  She has those eyes all the time, perpetually looking startled.  Sometimes the lighter hair on her head stands straight up, like a little mohawk cut.  The second is Mako, the big boy.  At the moment I took that, he thought I had some food.  The last photo shows both of them, and gives you an idea about their relative size.  Despite being much smaller than Mako, Cabo holds her own in any play battle.  That's mainly due to her completely ruthless nature.  When they're “fighting”, she will chomp down on any part of Mako that happens to be handy – yes, including those parts.  Ouch!  She's also much quicker and more agile than Mako, so she'll make fast runs at him and bowl him over.  Mako, on the other hand, appears to be much more polite about their battles.  Sometimes he even looks offended when she does something outrageous to him, and often he looks befuddled by the sheer speed with which she does it.  Despite all the mock fighting, though, these two are best buddies.  They spend all day in each other's company, even when they don't have to (our yard is big).

Yesterday afternoon, our neighbors across the street (Gary and Elayne S.) called us and invited us to go to dinner with them.  That was completely unexpected, but we hadn't seen them for a while, so we eagerly accepted.  We ended up going to a place we'd never been before: the Logan Steakhouse, which recently began the process of turning themselves into the Copper Mill.  Their web site apparently isn't operational yet.  We'd read bad reviews of the steakhouse, which when combined with high prices kept us away.  The reviews for the new Copper Mill were very good, though, so we'd been planning to try it out.  Our outing with Gary and Elayne was the perfect time to do that.  Debbie and I shared a fish & chips plate, and it was delicious – cod done perfectly, great fries, dinner rolls right out of the oven (or they sure tasted that way!), and a nice salad for Debbie.  Price was modest, too.  We approve!

Our conversations over dinner were mainly catching up on the past few months.  Somewhere in the conversation the subject turned to our solar panels, which Gary wanted to know why we had installed.  That led to a discussion about our Tesla (because the panels largely were justified by the need to charge it), which Gary and Elayne didn't know we had.  It turns out that their son has been urging them to get one, and they really couldn't figure out why.  That led to Gary and Elayne wanting a ride in our Tesla.  Gary wanted it to be to “someplace important” :)  So we're going to out with them to Maddox sometime next week.  And who knows?  Maybe we'll end up with our neighbor having a Tesla, too!

We bought a couple nice chunks of fresh ahi tuna from Macey's, and that's our dinner today.  Yum!  It's hard to beat ahi for fresh fish...

I have a new question to use in order to rule political candidates in or out.  “Do you support getting rid of Daylight Saving time?”  If they say “no”, they're not getting my vote...
Posted by Unknown at (permalink) 7:04 AM