Paradise ponders, mud, muesli, and Musk edition...  I saw the results of a snap poll taken last night, asking 120 random adult Americans what the significance of that day's launch of a Falcon 9 was.  Only 43 of them knew what a Falcon 9 was – and of them, only 17 knew that yesterday was the first attempted reuse of a rocket booster capable of putting a payload in orbit.  It was also the first attempt to re-land such a booster.  Both attempts were successful, something I suspect is likely to figure as an inflection point in mankind's exploration of space.  The 13 minute video at right is the first edited highlight reel; I'm sure more complete and produced videos will be forthcoming if you're interested.

The story of SpaceX (the company that made the Falcon 9) is a powerful argument for the primacy of capitalism as the engine behind the advancement of mankind.  Their goal from founding was to lower the cost of exploiting space (whether for manned or unmanned missions) by creating relatively simple reusable rockets.  Prior to SpaceX, all rockets were thrown away after a single use – and each of those rockets cost many millions of dollars.  The floor of the Atlantic Ocean east of Cape Canaveral is littered with the wreckage of thousands of such used-once rockets.  Our government space agency (NASA) insisted for decades that the notion of a reusable rocket was impossible on the face of it.  Later they changed their tune a bit, and said it might be possible but the development cost would be prohibitive.  Now NASA is a big customer of SpaceX, who did what NASA said was impossible – and did it with a tiny fraction of NASA's budget for a single year.  If they had any honor, NASA would close their ludicrously expensive development facilities and turn over their development to SpaceX and its competitors.  I won't hold my breath on that one.

Anyway, a tip of the hat to the entire SpaceX team this morning for a job spectacularly well done.  The founder and CEO of SpaceX is Elon Musk, who is also the founder of PayPal, Solar City and Tesla Motors, as well as the originator of the Hyperloop idea and most recently the launch of Neuralink.  If you were looking for support for the Great Man theory of history, his story would be a pretty good place to start. :)

A couple of weeks ago I went to our optometrist for an eye exam, mainly because my glasses weren't doing the job any more – especially close up.  My prescription had changed significantly, as I've previously posted about.  Last week I received my new glasses and wore them for a week.  They were significantly better for close up work, so much so that I could wear and forget them for all my woodworking, computer work, and reading at distances greater than a foot or so.  There was, however, one small problem: my distance vision was compromised during the daytime – and at night was downright horrible.  So back to the optometrist I went, and without any hesitation he re-examined me, decided I needed to change my distance prescription slightly, and ordered new lenses for me.  All this was at no cost to me.  My new glasses should be here on Monday or Tuesday next week.

Yesterday Mark T. and his helper Dave went to work on the trench for the new line of risers we're putting outside our back yard fence.  About an hour after they started (and made great progress!), the sky opened up and the rain commenced.  Within a half hour, the nice firm soil they'd been working with turned into something closer to peanut butter – and the surface an oily semi-liquid form of mud.  They parked the trencher and left; there really wasn't any other choice.  Now things will have to dry out for a day or two before they can go back to work.  Of course, we have more rain in the forecast for today and Sunday, so the drying out may take a bit longer! 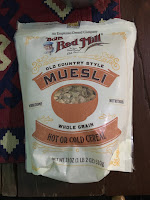 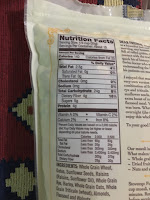 Last week I came across something I'd actually completely given up on ever finding in the U.S.: quality muesli that wasn't sweetened (or at least, wasn't very sweet).  I've been eating hot cereals from Bob's Red Mill ever since I moved up here.  Last week, looking over the display of their cereals, I spotted this muesli – and saw that the ingredients contained no added sugar or corn syrup.  The only sweeteners were dates and raisins.  If you're of fan of traditional muesli (which you can easily find in Europe), you're gonna love this stuff.  Highly recommended!

I finished all the milling to be done on the stairs yesterday.  The first two photos show the jig and results of milling the end of the big landing (this will be the side facing our bedroom door).  The second two show the jig and results of milling a groove in the ribs to hold the cross-member that will prevent them from wobbling.  These were the last bits of milling on the entire project; now all I have left is sanding, beating (to simulate use), bleaching, and finishing.  :) 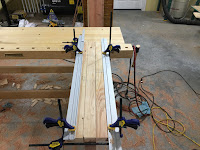 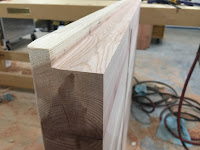 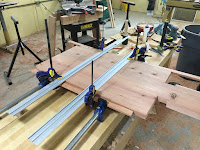 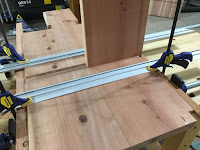 This afternoon we'll be heading to Los Primos for a special treat.  Our waitress on Tuesday told us that they'll be making Salvadoran stuffed peppers as a special today.  Recipes we found online convinced us that these were certain to be a delicious feast – so off we'll go!  Hopefully we'll be bringing our friend Michelle H. too...
Posted by Unknown at (permalink) 8:33 AM