Paradise ponders, dowels and maple-nut bar edition...  A few days ago, Michelle H. (a friend who's a member of the LDS ward that we're in) invited Debbie to an auction being put on by the Ladies' Relief Society.  This auction was something completely new to us.  Everyone attending (all women, I believe) filled out questionnaires.  From Debbie's description of the questions on it, I think they're trying to make a measure of how good and how faithful you are.  The questionnaires were scored, and the points one scored become the currency for the auction that followed.  Additional points were also awarded for things like participating in the song, staying until the end of the auction, etc.  Debbie ended up with a few hundred points, while others had thousands.  As Debbie said, having some was better than nothing, because in the auction she bid on a couple of items and won them!  She brought home two maple-nut bars and two big mason jars of homemade soup.  We only have one maple-nut bar now, as I ate the other one – delicious!  The soup looks fantastic: an Italian sausage soup with a tomato base and orzo.  I may have some later tonight!  All of the items being auctioned were homemade food items (and possibly some craft items, too).  The ones that went for the most points were things like pork ribs and roast turkey – and some homemade fruit pastries from a woman well-known for her baking.  Debbie also got a hearty breakfast out of the event, including samples of some of the aforementioned fruit pastries.  Debbie understood fully why they fetched a high “price”!  The best part of all for Debbie was that she got to meet and spend time with some of the local women.  She had a blast – she was all smiles when she got home.

While she was off stuffing her face and having a great time, I managed to get the next step (literally!) of my stairs project done.  I finished the drilling jig and used it to drill dowel holes in all of the faces to be glued, and I did the gluing and clamping.  The first photo below shows my test of the drill jig and depth setting on the drill press.  The goal was to have the hole depth be just a hair over half the length of a dowel peg, so that the same amount of the peg would be inside each piece.  That worked great.  The second photo shows a test fit of two pieces of the step held together just by the dowel's friction.  That fitting showed no errors of over 1/32", and that I can fix by sanding.  The third photo shows the little mark I made on each glued face to keep the orientation straight.  One arrow points to the upper surface; the other to the end that the jig should be fit onto.  The fourth photo shows the jig clamped to a step piece, ready to be drilled.  The fifth photo the clamps in the process of being set up.  The plastic is there to keep glue from dripping onto the workbench.  Note the two scrap boards that actually touch the clamps; these spread the clamping force more evenly across the face of the boards.  The last photo shows the boards all glued and clamped.  I had to move the end clamps right after gluing as the tops of the boards were pulling together with all the clamps on the bottom.  This will be even more of a challenge on the larger step, and I think I'm going to address that by using all eight of my pipe clamps on it: four on the bottom and four on the top.  Once the glue fully dries on the first, smaller step I'm going to sand out the small misalignments.  Tomorrow I'll tackle the big step! 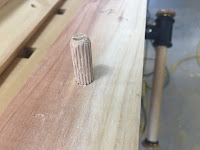 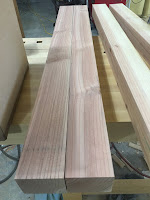 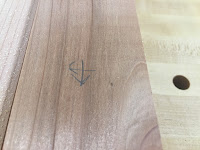 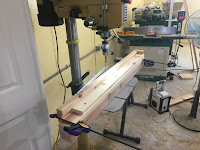 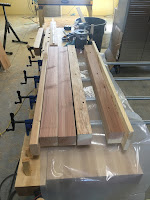 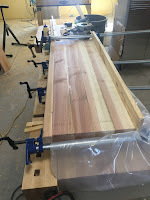