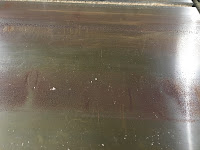 Paradise ponders, acidic wood and big hunks of redwood edition...  Yesterday I got a bit of a scare: I discovered that wood I'd left on my table saw's cast iron table had left big ugly black marks and rusty corrosion on it.  What the hell did that?  Well, the wood was redwood (4x4s) that I'm using for the stairs I'm building.  It turns out that the red heartwood of redwood lumber is highly acidic – something I had no idea of until yesterday.  I'd left the wood on that table for just two days, and the corrosion that developed in that short time felt like sandpaper when I ran my hands over it.  Not good at all!  The wood also had a terrible black stain on it, but fortunately not on a side that will be visible when I've finished the stairs.  After trying various ways to remove the corrosion, I found one that worked: a combination of M1 oil, Scotch-Brite pads, and elbow grease.  Two hours and some sore arms later, I had removed nearly all trace of that corrosion.  The only way you can see it now is by spotting a slight discoloration when you get the light at the right angle.  I put a new coat of M1 on it and called it a day.  But I will never store redwood on metal again!

What I was really trying to do yesterday was to get my big redwood “landing” built.  And I did!  I cut up six 4x4s into eleven 44" lengths, then drilled holes in the ten butt joints for dowel pins (60 holes for 30 pins, 3 on each of the 10 butt joints).  I used the jig I made yesterday to do that, and it worked fine.  The first photo shows the finished glue-up in the clamps.  With a piece this big, there's a danger of bowing.  The easy way to minimize that is to have clamping from both the top and the bottom, which is why you see so many clamps here.  There are other ways to solve this problem, too, but if you've got the clamps, this is the easy way.  This morning I removed the clamps and put the two slabs (big one near the camera, small one away) up on my workbench to get ready for sanding. 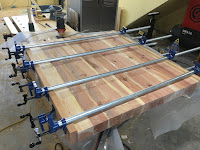 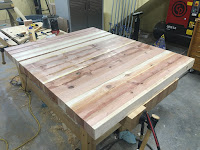 I'm quite pleased with how well these turned out.  First, there's no bowing at all on either slab.  I'll be installing “ribs” on these before I'm finished, and that will (or should!) prevent any future bowing as well.  Second, the joint mismatches are all well under 1/32", thanks to the dowel pins.  This will make them easy to sand to an acceptable flatness.  Well, it would be easy if I had a belt sander.  I thought for sure my trusty old 4" belt sander made the trip to Utah with us, but I searched high and low for it yesterday and it's just not here.  Apparently I left it in California with some of my other tools.  I ordered one last night, as for work like this (which I'd like to do more of), it's an essential tool.  “Like this” means “too darned wide to fit in my planer!”  So work on the steps is stymied until Thursday, when I'll have the new sander...

I did have one thing go slightly wrong while gluing up that big slab.  If I do something this large again, I'll be doing it in two steps to avoid the issue.  Because this time I did it all in one step, by the time I got done gluing and doweling the tenth joint, the first two joints had partially hardened.  It took me about 30 minutes to do all the gluing, so apparently the limit for TiteBond II glue is around 20 minutes at the 70 °F I was working in.  The specs say 10 to 15 minutes, but it seems to be a tad more than that.  I know from past experience that the bond will still be strong – this is more an aesthetic issue than a structural one.  There is a tiny gap remaining on the first joint, and an even smaller one (nearly invisible) on the second.  I worked some more glue into them to hide the issue, which I'm sure nobody but me will ever notice.  Still, what I should have done is to first glue up two smaller slabs, then in a third step glue those two together.  Had I done so, my working time would have been within limits for all of it...
Posted by Unknown at (permalink) 8:04 AM