Laundry, waves, growth, and poke...  Well, today was a bit of a mixed bag.  Our first job this morning was to get our laundry done.  We decided to try a new place on this trip: the wash and fold service at Downtown Laundry Express, because Yelp had it rated so highly.  Their wash and fold service was priced at $1.35 per pound, which meant our laundry would cost us about $25.  All we'd do is drop off the dirty laundry, then come back the same afternoon to pick it up.  That's a bargain so far as we're concerned, as it means we don't have to hang around the laundromat for a few hours waiting to get it done – we can take off and do some sight-seeing.  That's exactly what we did this morning, and this afternoon when I popped in to pick it up, I got all our laundry back, all nicely folded up and my shirts hung – for the princely sum of $22.65.  They did a great job with all of it, lost nothing, and fast and friendly service to boot.  Total time we spent on this chore: about 10 minutes.  Win!

While we waited for our laundry, we set off on a repeat of a trip we made something like 25 years ago.  On that long-ago trip, we left Hilo traveling east along the beach road, and continued all the way around Cape Kumukahi to the Chain of Craters Road in Volcanoes National Park.  This time we had to make that trip a bit differently.

First, the rude dirt road that used to traverse the coast east of Hilo to Cape Kumukahi is now gated off just a couple miles east of Hilo.  We couldn't go far that way at all!  Even that short trip was kind of mind-blowing, though.  On our past visit, most of that was wild, overgrown land with some homeless people living near the beach in giant concrete drainage pipe sections.  Now it's a large and upscale development, with fancy houses, paved roads, and beautiful beach side parks – very, very different from what we saw on our last visit to this area.

We drove back to Hilo, up to Kea'au, then down Kaloli Drive to the shore.  After that we could take various roads all the way along the shore to Cape Kumukahi.  This area was even more mind-boggling to us.  The last time we were here, it was a mix of wild land, small farms, and sparse downscale housing.  This time it was a densely populated suburb with a mix of midscale to upscale housing, mostly on lots of an acre or less.  We did run into a few short stretches that looked mostly like it used to, but darned few.  There were hundreds of lots for sale.  The highway from Kea'au to Pahoa, is now a six lane superhighway, where it used to be a narrow two lane road – and no wonder!  All those people who live down there have to use that road to get in or out of the area.  The area of our memories is almost completely gone, and the aggregate population there must be something like 10 or 12 times what it was.

Finally, we drove down toward the Chain of Craters Road, though we knew we couldn't actually get there – that road was overrun by lava from Pu'u O'o many years ago, near Kalapana.  Last time we were at that site, a barricade and the remains of the old subdivision overrun by lava were the only thing there.  Now it was a commercial emporium, with art galleries, photograph vendors, lava tour hawkers, and gazillions of sun-burned, unhappy-looking tourists.  We turned around and ran as fast as we could go.  Some photos below of this trip, along with a short video at right: 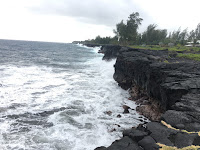 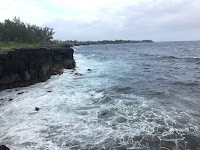 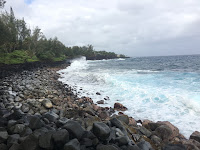 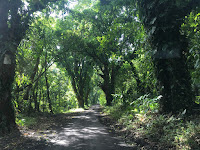 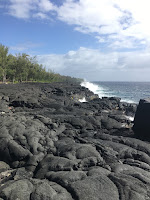 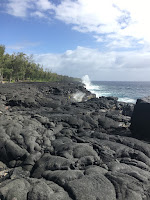 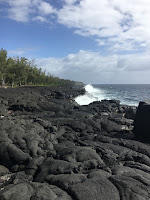 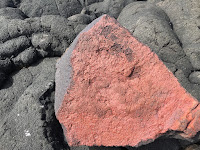 We got done with all this around 1 pm, a bit too early to pick up our laundry, so we decided to eat.  Guess where?  If you said “Suisan for poke!”, you win the prize!  For the third time now, we got a two choice bowl.  Today I had ahi Hawai'ian and ahi sesame shoyu; Debbie had ahi sesame shoyu plus spicy lobster salad.  Both of us thought our selection this time was the best of our three.  We drove down to Richardson's Ocean Park on the far eastern edge of Hilo to park and shovel poke into our faces.  It's a beautiful spot, and it wasn't very crowded.  We faced the ocean as we ate, and watched a seabird catching fish in a fish pond, a photographer flying a drone over the breaking waves, and the waves breaking on the rocks.  We also saw, quite accidentally, a humpback whale breaching a few hundred yards out from the beach.  We saw a second one do the same a few minutes later.

We only saw a few birds on the whole day's outing, but we did see two separate io (Hawai'ian hawks).  They're not too common, so that counts for something.  We also saw some yellow-billed cardinals just north of Kalapana, so now we've seen all three cardinal species present on the Big Island.

After our feast we drove into town and picked up our laundry, then headed to Da Hawai'ian Brain Freeze Shave Ice & Ice Cream to get a cold treat.  They serve ice cream and sorbet from Tropical Dreams, which we know from previous trips is a superior product – especially the sorbets.  Debbie had a Kona Coffee ice cream cone, and I had a mango sorbet cone.  Yummy, those were!

Tomorrow we're going to head back down toward Pahala and that gorgeous road we found – birding and sight-seeing are in our immediate future...
Posted by Unknown at (permalink) 9:07 PM