Debbie and I took a drive up Blacksmith Fork Canyon, and then later down to Porcupine Reservoir.  We saw quite a few deer, a few elk, and two mooses.  All looked fat and healthy given that it's late January.  We also saw something unusual: a flock of about a dozen turkeys perched about 20' high in a box elder tree.  It was weird to see those big black things sitting way up there!  Along highway 165 we saw a bald eagle flying; we also saw one yesterday in the same general area.  It must be wintering over here – probably comes from somewhere really cold, like the northern Yukon.

The highlight of the day for me, though, was spotting an American dipper in the stream in Blacksmith Fork Canyon.  It was in the stream, much like the one in the photo (not mine) at right, dipping and bobbing in their characteristic way, looking for bugs to eat. That implies that there actually are bugs in the stream, which given that the temperature there was 0°F is pretty amazing!

That got me to wondering why streams don't freeze solid in weather like this.  That canyon has been below freezing continuously for about a month and a half.  How is it that the water is still liquid, when the air and the ground surrounding it are well below freezing temperature?  I did some googling on the subject and discovered no explanations that I'd call authoritative.  This makes me wonder whether anyone has studied the question.  I did run across two perhaps plausible explanations (examples here and here), oft repeated.  The first says a stream will only freeze if heat is removed from the water faster than it's added by the water replacing it in any given spot along the stream.  That made me think of this: suppose you could follow one cubic centimeter of water as it flows down the stream.  If the air is colder than the water, would it not continuously lose heat and then eventually freeze?  The second reason I can't poke any holes in, but I also can't prove it to my own satisfaction.  Basically that says that as water falls (as the stream loses altitude), kinetic energy is continuously being converted to thermal energy (through turbulence, etc.).  So long as this thermal energy is added faster than it's being removed by the cold air, the water won't freeze.

We have a beautiful, large icicle on our garage right now.  It's actually threatening the structural integrity of our gutter: 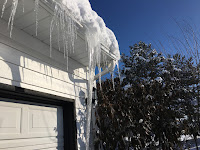 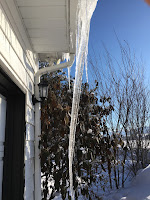 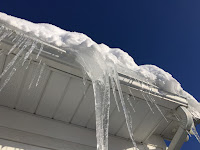