Paradise ponders, the pseudo-down day edition...  Well, I was hoping for a day of lazy leisure today, after the craziness of the past week or so, but such was not to be.  It should be a bit easier, though. :)

Yesterday our trip to Salt Lake City to pick up Debbie's car didn't go quite as planned.  First, Jeannie had a bit of an upset tummy and didn't feel that a meal at Red Iguana was wise, so she stayed home.  Tim came with us, though, and was his usual sunny company all day, despite what happened to him later.  What's that, you ask?   Well, the process of getting Debbie's car was far more complicated that getting my Tesla was.  Instead of dealing with a single person, we dealt with three: one to finalize the sales paperwork, a second to handle the financial angle, and a third to teach us how to use the car.  Each of these took over an hour, three and a half all together.

Just after we left Tim's house, Debbie got a text from Michelle H. (who was at our house): our fire alarm was reporting smoke in the house.  Yikes!  We zipped back, and I quickly figured out that this was a false alarm (the third time that's happened in the two years we've had the Nest Protect alarms).  This time, though, it wasn't obvious which alarm (there are 12 in our house) was causing the problem – the name it was hollering at us didn't match any room in our house.  I ended up removing the batteries from all 12 alarms before I finally found the culprit.  The ambiguity is caused by a limitation of the Protect's software: it has a fixed list of names for rooms that it knows how to say.  Some of our rooms have no rational match on that list.  Our “mechanical room” (the locally standard name for what I'd call the “utility room”, with our furnace, water heater, etc. in it) is one such room, the cattery another.  So we chose other names from the limited list, more-or-less at random – and then promptly forgot them.  After I dismantled the entire alarm system, we took off.

One pleasant surprise for us: the offer Lexus made us on our trade-in (a 2010 Tundra with 130,000 miles on it) was considerably higher than Blue Book, or anything we thought we could sell it for ourselves.  I suspect that mostly means I didn't negotiate as low a price on the car as I could have. :)  On the other hand, the session with the finance guy went exactly as I expected.  If you have little experience with such things, you might think that the fact we were paying cash would mean this was a trivial event.  Oh, no.  From the car dealer's perspective, the finance guy is an opportunity to upsell you on grossly overpriced dealer add-ons (things like “paint protection” and “undercoating”).  This fellow started with nearly $10,000 worth of such add-ons – a mind-boggling amount to me.  They must often succeed in selling them, as they put an awful lot of effort into doing so.  I'm sure the margin on those add-ons is very high, too.  We declined them all, a big disappointment for this poor guy.  We did, however, buy two Lexus options: an extended comprehensive warranty and two years of routine maintenance; the price on both was quite reasonable. 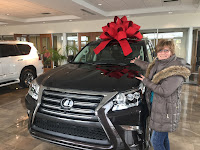 Finally it was time for us to be introduced to the car itself.  They had it parked in a special place, with a red bow on top, all ready for Debbie.  The “delivery specialist” spent an hour with us going over all the controls and indicators in the car.  Your impression, sitting in the driver's seat, is starkly different than sitting in the Tesla's seat.  The Tesla has very few controls visible, and just two displays (in front of the steering wheel and in the center console).  The GX 460, on the other hand, looks more like the cockpit of a 737.  There are switches and knobs everywhere, along with indicators of various kinds (especially lots of idiot lights).  There are both pros and cons to this, as a drive in either will quickly point out.  I can't even say which approach I like better overall, though I can easily point out aspects of each that I like.  For instance, on the GX 460, there is an indicator telling you that there's another car (or object) in either your left or right blind spot, and the Model X has the same thing.  On the GX 460, the indicator is built into the side view mirrors, right where you'd look for an object – I found that very natural.  The Model X, on the other hand, has a really cool little “cartoon” with a fancy live pictorial of what surrounds you.  I like it, but I'm finding that I need to train myself to look there for obstacles.

Despite this being Debbie's new car, she didn't want to drive it home through the Big City.  As I write this, she still has not driven it on the street!  So I drove from the dealer (when we finally could escape!) to the Red Iguana, where we had another lovely meal.  Tim and I both had machaca burritos, enchilada-style (smothered in enchilada sauce and cheese), while Debbie had a beef dish whose name I didn't catch.  Those burritos were enormous, but Tim and I managed to finish the whole thing and have dessert besides. :)  Some photos of the event: 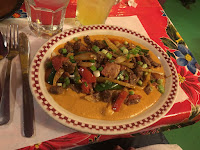 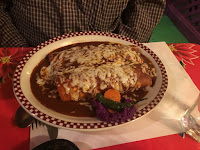 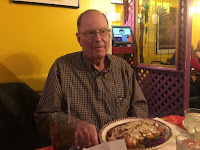 Then I drove us all home.  Most of the drive consisted of us moaning and groaning about how full we were. :)  I did have some fun exploring the GX 460's features, my favorite one of which is the adaptive cruise control that uses a radar to stay a safe distance behind the car in front of us.  And Tim was our master wildlife spotter as we transited Sardine Canyon, spotting lots of elk and deer throughout.

This morning I made an early run to Walmart to pick up a label machine, for my big project today: fixing the alarm problem.  The drive there was very beautiful; the sun had not yet risen over the Wasatch's to our east, but the Wellsville mountains to our west were lit with a soft orange glow, as if through a slightly fogged camera lens.  I had no clear view to take a photo, but it surely was beautiful.

First thing this morning I uninstalled all 12 of our Nest Protects, and now I'm about halfway through reinstalling them.  They're each getting a carefully selected name from that limited list, the best choice I can come up with.  They're getting a proper name (this is not limited) for display on the alerts we get on our phones.  They're each getting a physical label on them with both the proper name and the verbal name (which on four of the alarms don't match).  And perhaps most importantly of all, I'm building a list that has the proper name, the labeled name, and the verbal name for each.  This list will be available on each floor of our house somewhere, so we don't have yesterday's problem happen ever again!
Posted by Unknown at (permalink) 10:01 AM