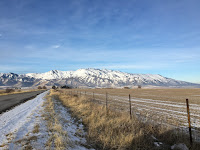 Paradise ponders, panettone and bananas edition...  Well, yesterday we did make our trip down to Salt Lake City (SLC) on a quest for fresh crab meat (photo at right we took on the way there) – and we succeeded, sort of.  I managed to find 1.6 lbs (we were looking for 1.5 lbs) of snow crab leg meat.  That's good stuff, but not the kind of crab meat one would normally use for crab cakes.  They should be good anyway, though.  In the process, we found two very interesting stores in SLC; we'll definitely be back to visit both of them.  We also found one that we weren't impressed with, and likely will not return to – even though that's where we found the crab meat!

The first of these interesting stores was the Ocean City Seafood Market, which had very high Yelp reviews, but lots of comments that didn't sound so wonderful.  After spending some time walking through the store, we concluded that these negative reviewers were just ignorant.  This was a market!  Lots of fresh seafood, mainly fish, on ice and looking great.  They had a giant tank full of live (and happy looking) Maine lobsters, at a great price.  They didn't have fresh crab meat, dang it.  They did have frozen crab meat, but we were looking for fresh for our crab cakes.  But that seafood was just the beginning: this is an Asian grocery store, though you'd never guess that from their name.  They have lots of produce, fresh herbs, Asian spices, and things you never see in an ordinary grocery store, like mochi, frozen pre-made lumpia, a huge selection of won-ton wrappers, etc.  The people there were very friendly and helpful, too.  Definitely a place we'll be returning to, especially for that lobster!

The second interesting store was an accidental find, when we were looking for the Aquarius Fish Company.  We found Aquarius, but it was closed (we were too early).  Next door, though, was Caputo's Market and Deli, which I took a stroll through.  It's got the best selection of cheeses I've seen in many, many years – the equal of a cheese shop I once visited in London.  That's not all it has, though: it also stocks an amazing variety of sausages and preserved meats, especially Italian types – and shelf after shelf of all things Italian food related.  I'm pretty sure that anything you'd ever need to make an Italian dish is readily available there.  I spent a couple minutes just smiling at their selection of capers – there must have been two dozen types!  That's another place we'll be returning to, with an Italian menu in mind...

The last seafood market we visited was the Market Street Grill, a chain with a half-dozen or so locations scattered around the U.S.  In many ways it reminded us of the Fish Market, a similar chain with a location we used to visit in Del Mar.  Their was a nice little seafood market attached to a large restaurant.  The selection wasn't very good, and the prices were high – and the lady who served us was distinctly grumpy.  However, they did have fresh crab meat, which I bought them out of.  I doubt we'll be returning; they're about 15 miles further from us than the other seafood markets, with a much smaller and pricier selection.  They're located in a tech district, and I suspect they're mostly catering to the lunch crowd from those places.

After scoring our crab meat, we stopped (of course!) at the Red Iguana to have some lunch.  It was quite crowded, even though we got there at 11:30 am.  We had to wait about 20 minutes to get in, not too bad.  For once their specials were unappealing to either of us, so we both ordered off the menu.  I had “mango enchiladas”, which were actually carnitas enchiladas with mango mole sauce.  They were heavenly; I savored every mouthful and scraped up every drop of that mole sauce.  Debbie had steak ranchero tacos, and they came as though someone had designed them for her: chunks of beef on corn tortillas, chopped onions and cilantro, salsa fresca, and rice and refries.  She ate it all except for a few refries, a big smile on her face the whole time.  Then we had flan (me) and arroz con leche (Debbie) for dessert.  A wonderful meal, as always.

Our house was cold when we got home: the thermostat was calling for heat, but none was forthcoming.  I did a bit of troubleshooting, but couldn't find any problem.  The furnace normally shows an error code (via flashing light) when it thinks there's something wrong, and there were no error codes.  So I called our heating and air conditioning guy – and he sent someone over within a couple of hours.  The repairman, Joe, spent a couple hours carefully going over everything we could think of, until he figured out that the plenum was getting too hot and a thermal switch was cutting out.  Once he'd twigged to that, he started eliminating all the things that could cause such overheating – and finally figured out that we only had two return grilles on the entire first floor.  With a 100,000 BTU furnace, we should have four or five, or even more.  Then with some detective work, we figured out that someone (probably the previous owner) had eliminated two of these return grilles – apparently just boarded them up.  Why, we haven't the foggiest!  So sometime next week we'll have to go to work on that problem.  In the meantime, we whooped up the fan speed in the hopes that that will get us by for a few days.

This morning I had a ball with the dogs.  They got a special treat: two bananas instead of their morning one banana, shared amongst the four of them.  All four of our dogs go bananas for bananas.  The puppies are especially cute with the bananas, as they completely lose their marbles while scrambling for them.  I slice them up and drop them into their gaping maws, but only after they've settled down and are sitting nicely.  Cabo is focused like a laser on the banana slice in my fingers.  Mako will alternately watch me and the banana.  The two adults know the drill: they wait for me to call their name and then go into action.  Lots of fun!

We had a treat this morning, too.  It's become a Christmas tradition for us to get a panettone, an Italian sweet bread loaded with fruit.  I especially like them when they're not too sweet, and have lots of tart, juicy fruit in them – and the one we got this year (below) fits that description perfectly.  It's hard to think of anything that goes more perfectly with a nice cup of tea in the morning! 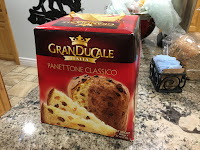 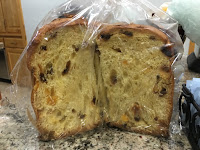 Later today we'll be starting our Christmas cooking.  Homemade egg noodles, tartar sauce, carrot-ginger soup, and bread crumbs are on the agenda.  We also have a few gifts left to wrap.  Should be a fun day!

Posted by Unknown at (permalink) 7:22 AM