Paradise ponders...  Busy day yesterday, and I just flat-out forgot to post!  I spent much of the day cleaning out our garage.  Our house has a three-car garage attached to its west side, but our current vehicles won't fit in it (they're a few inches too long) – so for the past two-and-a-half years, we've used it as a sort of storage unit, but without any organization.  Or, in other words, it was a real mess!  I got most of it moved and organized yesterday, and I'll finish that up today.  Why?  Well, because we're going to have two cars that will actually fit in there sometime soon.  First one coming is our Tesla Model X, arriving in about a month.  Woo hoo!  Then, a few months later, Debbie's Lexus GX 460 will be arriving (feminine woo hoo here).  She had to special order hers to get the color she really wants – to get one “off the lot” she'd have to settle for white or silver, and that's just not happening! :)

One thing that happened yesterday was borderline miraculous: some construction guys showed up earlier than expected!  A crew of seven guys showed up to hang drywall in our mud room and sun room.  The head guy (an older Hispanic guy with a beautiful smile missing about half his teeth) estimated two to three hours.  Then a few minutes later he came back to tell me they were short six sheets of drywall.  We called his boss together, figured out with the boss that he (the boss) had screwed up the estimate, and we got the boss committed to delivering the needed drywall within a half hour.  It showed up, too.  And then the crew got the whole job done in just 90 minutes.  These seven guys worked together as if the entire job was choreographed – it was impressive to watch!  They did a really nice job, making holes in all the right places for my electrical fixtures, and handling every detail I gave them exactly right.  Next step: taping and texturing, which with any luck at all will happen today.  A couple photos of the crew at work: 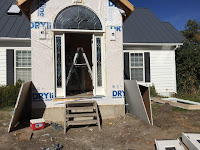 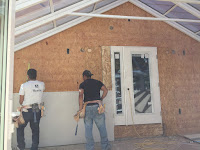 Debbie tells me that we're “real” Utahans now.  Why now?  Because I just ordered a snowblower. :)  What provoked me to order the blower was the realization that we're about to start using our garage.  The entrance for it is tucked into a nook of our driveway that I can't reach when plowing with my tractor.  Worse, the roof slopes down such that snow falls off onto the garage apron, a couple feet in front of the doors.  I'm not at all excited about digging that out by hand! :)  Hence the snowblower.  It will also be a good backup for those occasions (as we had once last year) when we had conditions that made the tractor plowing not work well at all.  That was the combination of ice on the pavement and wet, sloppy, heavy snow on top.  From what I've read, the snowblower can handle even that, albeit very slowly.  Still much better than a shovel, which is what I was reduced to last year that one time...

We're expecting the construction workers to show up today to install the last of our four new doors, this one to go from our kitchen to our new deck.  We're also hoping that they'll get started on that new deck.  Today or tomorrow they should also be pouring two new concrete porches for us: one for the sun room, and the other for the front door.  As if that weren't enough excitement for one day, the roofers are also supposed to show up, to finish the last bits of the mud room roof and to start on our mud room siding.  We're in danger of having the mud room actually be usable!  We had a flooring estimator here on Tuesday, starting the roughly two-week process of getting the tile installed in the sun room and mud room.  If this all comes off, we should be able to actually use the mud room and sun room by about November 15th...
Posted by Unknown at (permalink) 6:08 AM