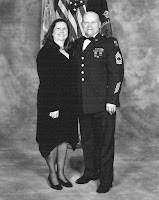 I start with a bit of a mystery today.  I have no idea who either of the people in the photo at right are; it is undated and there are no notes on it.  It's obviously a studio portrait, presumably of a married couple.  The man is wearing a U.S. Army uniform; the insignia indicates he's a Master Sergeant – that's an E-8, the next-to-highest enlisted rank in the Army.  He has 7 “hash marks” (the stripes on his left sleeve), indicating that he has somewhere between 28 and 31 years in service.  Do any of my siblings have a clue who these people are?  Update: My brother Scott recognized the man as “Bernice” a friend of my brother Mark.  Mark then identified him as Bernice Dill, and his wife Sherry Dill. He's still in the Army, and the two of them still visit Mark and his wife Gina in Maine every year.

The woman at right is Rolana, my brother Mark's first wife.  The sweet young thing at left is one of her daughters, Tami.  The photo is undated, but must be from the early '90s.  I have no idea why it's black-and-white.

On the back, in handwriting I don't recognize: “1/10/98 I sunk 2’ (feet) (sleet) when I took this picture of a camp on Long Pond”; right below that, in my mom's printing: “Old Camp - tear time - many, many good times here”.  Truer words I cannot find.  That's the back (i.e., away from the pond) side of my family's old camp on Long Pond, now long gone.  What you're looking at was built in four stages: first the main cabin (the part with the tin stove pipe sticking out of it), then the front porch (not visible as it's on the opposite side), then the bedroom extension off to the left, and finally the bathroom and storage room closest to the camera.  There used to be an outhouse just to the right of where the photographer was standing, and there were more trees (I'm not sure what happened to all of them).  I've only seen the camp once in the winter, in '73 or '74, while on leave from the U.S. Navy.  When I saw it, there was much more snow! :)

For some reason my dad annotated this one: “Grandma + Marci”.  The photo is undated, but I'm guessing it's from the late '80s.  I have no clue where it was taken; I'm not familiar with that merry-go-round at all.

I know this place well – it's the front yard of my maternal grandparents' home in the '50s; the place I remember them the best.  On the back, in my mom's handwriting: “Dad & Sliver looking over the nursery”.  On the left is Sliver Sturgeon; on the right my mom's father (my grandfather) Donald MacLaughlin.  Behind the photographer was their home.  They often had parties on that front lawn, usually involving cards, beer, and highballs.  That hand-dug well with its massive bluestone cover was often my perch on our visits when I was quite small.  My grandmother once chalked some squares on that sidewalk for us to play games on, games that she taught us.  My memories of those visits are mainly all about the happy faces, laughter, and general high spirits of the people there – including, especially, my mom.  My grandfather's retail nursery included the stock field across the street that they're looking at, but most of the facility was left of the photo's field of view.  Down there was some parking, the greenhouse, the potting shed, and several display beds under some grand old shade trees.

On the back, in my mom's handwriting (in fountain pen): “Sliver Sturgeon Lincoln Maine”.  The photo is an original, but unfortunately undated by the lab.  It's on cheap off-brand photo paper, so I'm going to guess it was processed by someone in Maine.  From Sliver's appearance, I'll guess this was taken in the early '50s.  Note his cap and plaid shirt: he and my grandfather (my mom's father) dressed quite similarly.  He was a great friend of my grandfather, and to a slightly lesser extent, to our extended family; I have lots of memories of him laughing, joking, playing cards with my grandfather and the rest of us. 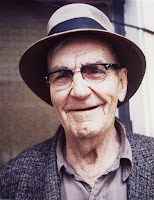 This is a duplicate on photo paper of a slide I posted before.  The color fidelity on this print is better than the slide, so I'm posting it again.  This is Doc Johnston; follow that link to read about him. 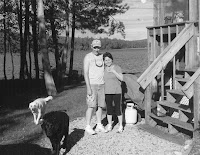 Finally, this is my brother Mark and his wife Gina, along with their two dogs, outside (I believe) the camp on Long Pond in Maine.  I say “I believe” because I don't recognize the stairs.  I suspect this photo was taken after Mark took possession of the camp (in the early '00s) and fixed it up; I've never seen it.  That certainly looks like Long Pond behind them, and the floating dock is right.  I certainly don't remember a lawn in the front, though!  The two of them look very happy in this photo, don't they?  Several things in this photo jump right out at me.  For one, the neatly edged gravel walkway – I can't even imagine such a thing when my grandfather owned it! :)  Then there's the lattice work hiding the crawlspace; again, that would never have happened (it was a total mess under there; we loved to explore it as kids).  But most of all, the propane tank and grill (presumably that's what's under the cover): we cooked meals inside the house on a wonderful wood-fired cook stove.  Grilling on a propane grill?  Get out of here!
Posted by Unknown at (permalink) 3:16 PM