This is an undated modern copy of an older photo; I don't have the original.  In my mom's writing on the back: “Aunt Mattie”; someone my mom mentioned often, but whom I don't recall ever meeting. 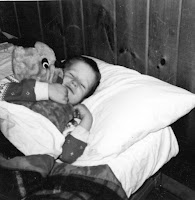 This photo is also undated, but it's an original; looks like it was taken with an old Brownie or the equivalent (from the square aspect ratio).  My parents owned an actual Brownie when I was young, so I'm guessing that's what took this.  There's no note on the photo, but from the knotty pine paneling and the bed, this must be the bedroom that my brother Scott and I shared as kids – and that's Scott in the photo.  He looks to be about 3 or 4, so this must have been taken '56 or '57.  I don't remember the stuffed dog at all. 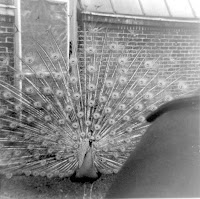 Now here's a real mystery.  I found this photo buried amongst a bunch of family photos.  There's no note on the back, and it's undated; it's an original printed on old-fashioned thin high-gloss photo paper.  I don't recognize the location at all.  Someone's shoulder is partly obscuring the peacock, but I've no idea who that might be.  I especially don't know why my mom decided to save this one!

This is another undated modern copy of an older photo that I don't have.  My mom wrote on the back:

This annotation isn't as much help as it might have been, as her sequencing is a bit ambiguous! :)  I'm guessing that it's clockwise starting with the young man at the lower left.  That's certainly her mom (my grandmother) at the lower right.   I like the eclectic collection of chairs they assembled. :)  I can't tell where this is.  My grandmother's appearance is a bit hard to make out, as the photo is of pretty poor quality – but she looks roughly like my earliest memories of her, which would put this around the early '50s.

Like the preceding photo, this is an undated modern copy of an older photo that I don't have.  In my mom's handwriting on the back: “Mom + Paul Jay”.  I sure wish I knew who Paul Jay was!  That's my grandmother on the left, looking like she's about to whack Paul Jay over the head with a shovel or something.  He's doing something with bricks – perhaps he was a mason?  He must have thick calluses to be handling bricks like that, without gloves.  He's puffing on a big old stogie.  Nothing about the scene looks familiar.

Finally, here's one last undated modern copy of an old photo I don't have.  In my mom's handwriting on the back: “Bonnie”.  That would be her sister (my aunt) Bonnie, and at a very tender age.  Sure wish this was dated!  The other things in the photo sure look old-fashioned, don't they?
Posted by Unknown at (permalink) 7:22 AM