This one is a modern copy of an older photo, undated.  On the back, in my mom's handwriting: “Elinor Donald - Dad”.  The kid on the left would be my mom's brother (my uncle) Donald, my mom is the kid on the right.  Her father (my grandfather) is the adult, looking very young compared with my memories of him.  If my mom is three there, then this was circa '38.  I don't recognize the house, though we've seen this exact view in some other photos.  It was apparently their go-to place for taking photos.  Gotta love the clothesline (or whatever) crossing right over my grandfather's face! 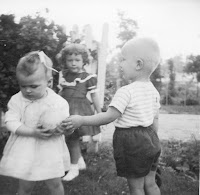 Also undated, but an original, and on the back in my mom's handwriting: “Tommy on right.  My cousin Kay’s daughter Joy on left.”   I have no memory of either Kay or Joy, nor do I know who the other little girl is.  I don't recognize the location, either.  And I wouldn't even have known that was me in the photo!  I look to be around three, making this circa '55. 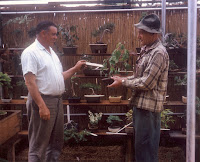 Another modern copy of an older original.  The copy was made in 2010, and I don't have the original.  I've no idea who the man on the left is, but the man on the right is my mom's dad, my grandfather, Donald MacLaughlin.  He was a nurseryman, very interested in creating bonsai.  The tag being held up says “Weeping White Dogwood”, which presumably is the plant my grandfather is holding up.  I'm guessing it's his bonsai, and that this was some sort of bonsai display that he participated in.  The main impact of this photo for me, though, is just how perfectly his appearance in it matches my memories of him.  The hat, the shirt, the watch, the leathery and wrinkled face: all perfect.  A whiff of his beery, smoky aroma came right to memory on seeing that.  I also realized, on seeing that photo, that the general style of hat he's wearing is also my preferred type – except that I favor those made to be crushable and foldable; his were always fairly stiff, like a slightly soft felt cowboy hat.

On the back, in my mom's handwriting: “Mable Graduation”.  That would be Mable (nee Johnson) MacLaughlin, my mom's mom (my grandmother).  It's another modern copy of an older original that I don't have, so I have no lab date to go on.  I'm guessing that her mom was born around 1900, and assuming this is a high school graduation photo, that means it's circa 1917 – near the end of WWI.  She's holding a rolled up diploma tied with a ribbon, and that's a very old-fashioned looking dress she's wearing.  What's behind her head?  Some kind of a hairpiece?  And is that a watch strapped to her left arm, halfway up?  What an odd place to wear something!  It looks like it would slip down immediately.  It's hard to tell for certain, but I think she's wearing white cloth gloves, too – very fine cloth, possibly silk. 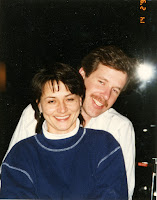 My brother Mark and his wife Gina, in an undated photo that looks to be from roughly 10 or 15 years ago (so early 2000s).  Both of them look very happy, and like there might have been some alcohol consumption before the photo was taken. :)  On the back, in my mom's handwriting, simply: “Mark + Gina”.  There are relatively few photos of Mark in my mom's collection – and actually relatively few of any of her kids as adults...

My sister Holly, in what looks like a school studio portrait.  If I try to guess her age, I'll get it wrong and she'll holler at me, so I'll wait until I hear from her before posting it.  The terrible color is far better than the original looks – the studio scrimped on the photo paper, and used some awful off brand with dyes that have faded in unforgivable ways.  I've applied all the correction my photo software is capable of, and this is the result.  I tried, Holly!  :)

This is another modern copy of an older original that I don't have, so I don't know the date.  On the back, though, in my mom's handwriting: “Betty & Mike early 50s”.  That would be my mom's sister (my aunt) Betty and her son (my cousin) Mike.  Aunt Betty looks younger than any memory I have of her, so I'm guessing this is very early '50s.  I'd never have recognized Mike, as he's far younger than any memories of have of him.  The house looks familiar, but I can't place it confidently.  It may well be Aunt Betty's house; they moved several times during my childhood. 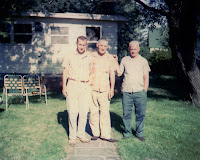 Yet another modern copy of an original I don't have, and this time my mom's inscription (below) gave no clue:

My grandfather (in the center) appears about like he did in the late '50s to early '60s, so I'm guessing that's the rough time frame of this photo.  The location is my grandparent's home in northern New Jersey.  It's a bit of a surprise to me that Sliver (a Maine resident) visited them there.  The two Donalds are dangling cigarettes, an entirely normal pose for them.  My grandfather is outside sans hat, a bit unusual.  Note the beer bottle on the lawn chair: the only thing unusual about that is that there's just one!  Those lawn chairs were the object of some pride for my grandparents: the aluminum frames and plastic webbing were quite the new thing at the time.  The chairs were expensive and a bit fragile, so we kids were always being admonished to be careful around them.  On the house you can see an old-fashioned electric meter.  I got in trouble once for breaking the seal on that meter, using a pair of my grandfather's pruners.  That's the only occasion I can remember when he actually got angry with me – he scared the hell out of me when he started yelling and chasing me across the yard, my mother trailing behind beseeching him not to hurt me.  He didn't – but when he caught me (about 20' away), he grabbed his pruners and inspected them very carefully for damage.  He wasn't mad because I broke the meter's seal (which is what I thought at the time), but rather because I used his pruners to do it – he was afraid I'd wrecked the blade.  Later in life I came to learn a truism: the surest way to get any horticulturist mad at you is to mess with their pruners!
Posted by Unknown at (permalink) 10:29 AM