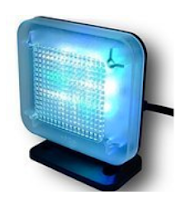 Product endorsement...  Most burglars won't enter a home that they believe is occupied.  Of course there are exceptions, but the vast majority of burglars would rather avoid the risks associated with breaking in and entering an occupied home.  That's the reason people buy those gadgets to turn lights on and off at random: it makes a potential burglar think someone must be at home.  The trouble with the light switching gadgets is that real people don't actually turn lights on and off at random – and they actually don't turn them on and off very often, either.  What real people do do, though, is watch TV.  Lots and lots of TV.

Now we don't have a burglary problem around here – house burglaries are very rare, and most people here don't even bother locking their doors.  I suspect that's partly because any burglars would know that everyone here is armed to the teeth, and also of a mindset that says one less burglar in the world makes for a better world. :)  It's probably also partly because everyone here watches out for each other, and because there aren't a lot of people with interesting possessions to burgle.  So we generally don't worry about it at all.

But I saw this gadget for sale and thought it was so clever that I just had to see how well it actually worked.  It's a small device, about two inches square, that contains an array of multi-colored LEDs.  Starting at dusk and continuing for a settable amount of time, it blinks the LEDs to simulate what it looks like when someone is watching TV.  I've got mine aimed at the ceiling in our second floor TV room, and when I'm outside after dark it really does look just like someone is watching TV there.  If you drive down any street at night, you'll see lots of windows that look just like this.  The simulation is good enough that even with careful inspection I couldn't tell it was fake.  The price is quite low, and the power consumption is also quite low – this would cost only a few pennies per night to operate.  I'd be willing to bet that it's effective at deterring the type of burglar – the most common type – that will avoid entering a home that appears to be occupied.

Well done, whoever dreamed this up.  Very clever!
Posted by Unknown at (permalink) 9:41 AM