Paradise ponders...  We had quite the rainstorm yesterday: a steady gentle rain most of the time, interspersed with downpours.  For the storm total, we're at 2.5", and it looks like that's the end of it.  The skies here are slowly clearing.  But ... now the forecast shows a good chance of rain a week from now!  :) 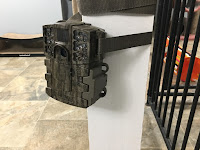 We've been having a rash of urinary tract infections in our cats – six or seven of them so far this year.  The first symptoms we notice is that there's an ammonia smell, and the cat's urine doesn't clump in the litter box.  Up until now we've been lucky in that we've been able to figure out which cat it is.  This time, though, we've got a challenge: one of the cats in our cattery (with 9 cats) has a UTI, and we don't know which one.  How can we identify which cat it is?  but when I started poking into the notion of a webcam, things started to look challenging: they need power, big storage, etc.  Then I had a brainstorm: use a trail camera!  These things are made in high volumes and are therefore quite inexpensive.  They're battery powered, as they're designed to be strapped to a tree.  Motion triggers them to either take a short video or a single snapshot.  They use infrared to take photos even in the dark.  So I ordered one, and this morning I set it up, aimed at the offending litter box (photo at right).  Probably that will trigger the cat to move to a new litter box! :)  It will be interesting to see whether this works.  Even if it doesn't, I'm going to set this up outside to see if I can get photos of deer and elk in our yard at night.

Well, we noted that the non-clumping litter is generally only appearing in one of our litter boxes.  Since cats are creatures of habit, and usually use the same litter box, that makes sense.  So Debbie had the idea of setting up a webcam that recorded, and we could watch the video to see which cat it was.

Yesterday we did lots of running around for various chores, and I didn't get a whole lot done.  I did, however, have a chance to start a conversation with an old Navy buddy of mine (Mike B.) over a project both of us would enjoy having: a programmable box joint jig.  If you're a woodworker, this will make sense to you, otherwise you can skip the rest of this post. :)  A box joint (also called a “finger joint”) is made by cutting "fingers" in the ends of two pieces of wood such that the fingers interleave perfectly with each other.  There are lots of ways to do this, but in all cases the cutting must be done very precisely, or else the fingers won't fit together correctly.  One way to do this (and perhaps the most common method) is to use a table saw, making repeated passes on the work piece to cut out the space between the fingers.  You can buy “jigs” designed to make this easier, but it's still quite a bit of work – error-prone work! – to get them cut right.

As if that weren't enough challenge, things get even more interesting if you want to make something with more than four sides.  For instance, if you want to make an octagonal serving tray with sides a few inches high, then those fingers have to be cut at an angle of 45° to the end (instead of the usual 90°).  Even more challenging is if you want something that has slanted sides.  For instance, suppose you want to make a hexagonal trash can, with 6" sides at the bottom, and 8" sides at the top.  That's quite challenging, as you need a compound angle. Then there's the question of the finger width.  Conventionally the fingers are all the same width, as that's the easiest way to do the work.  But aesthetically it would be interesting to be able to vary the finger width.

Mike saw a programmable box joint jig online, and that inspired us to come up with a much more capable version.  Mike and I have started a little collaboration for this gadget, which we're calling “BoxZilla”.  It will be able to do the simple 90° joints, but also the more complex joints as well.  It will be completely controlled by a Raspberry Pi computer, a little $35 wonder that's millions of times more powerful than the computers I started building in the '70s.  Mike is going to do the mechanical and electronic design and construction, and I'm going to do the software.  This will be a very fun project for both of us, and best of all both of us will hugely enjoy using the thing when we get done.  Mike is considering selling them, too.  We're just getting started on it now. I'll post about our progress from time-to-time...
Posted by Unknown at (permalink) 9:02 AM