Paradise ponders...  I managed to take the puppies for a two-mile walk yesterday.  We didn't see anything particularly exciting.  The air was a bit hazy; water vapor as the bright sunshine evaporated water from the fields wet by our rain a couple days ago.  That rain brought out some flowers alongside the road: 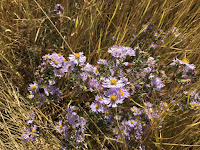 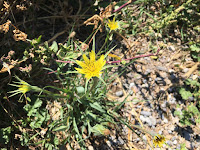 In the late afternoon we headed for Murray, Utah, just south of Salt Lake City.  We were first going to take a look at a car, then heading for dinner with some of Debbie's dog agility friends.

Debbie's truck is seven years old now, and it's about time for her to get something new.  She's been looking closely at the Toyota 4Runner, which has grown in size over the years and is now about the same size as the LandCruiser we had many years ago.  She's looking for an SUV with excellent safety characteristics, high clearance (for rough roads), good towing capacity, and the look she wants (something like the older LandCruisers that didn't look like a car).  The 4Runner fits the bill quite nicely.  But ... I discovered that Lexus makes an SUV that's basically an upgraded 4Runner.  What I particularly liked were some good safety and driver convenience features.  Debbie liked the descriptions of the interior (can you say “heated leather seats?”), but wasn't sure she liked the appearance. The closest Lexus dealer is near Salt Lake City, so we decided to take a look before dinner.  The short version of the result: Debbie loved it.  :)  I think we may be getting one. 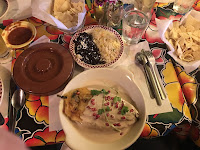 After the adventure at the car dealer, we headed to Red Iguana, where we met up with seven fellow dog people – eight women and me. :)  The dinner did not disappoint, of course.  I had one of the specials, a dish they called chili relleno nogales.  I call it heavenly; there's a photo of it at right.  The chili (done perfectly, of course) tasted like an Anaheim chili, but I've never seen an Anaheim chili that big.  It was lightly breaded in egg batter, like a chili relleno should be.  The stuffing was complex.  I could pick out the tastes of cheese, mushrooms, and raisins – but the spices I couldn't reverse-engineer.  There were pomegranate seeds sprinkled on the top.  Black beans and rice accompanied it.  Despite the size of that thing, I still had room for dessert: flan and Mexican hot chocolate, both wonderful.  Debbie seemed just as pleased with her selection, though after tasting my chili relleno she thought maybe she'd made the wrong choice.  I'll note, though, that none of her dinner remained by the time we left :)  We went home with very happy tummies.  It was nice to see all the dog people, too.  We did get to talk some, but the restaurant was so loud that it was challenging to have even a short, simple conversation.  No matter; just being with each other, surrounded by smiles and happy faces was more than enough.