Paradise ponders...  We had an eventful day yesterday, so much so that I never posted about the nice walk I had with Mako and Cabo on Wednesday!  The three photos below are from that walk, with nice views of the early fall fields in an ever-changing play of light due to the cloudy skies.  The last photo shows a bluff above the highest point of our walk, with trees in fall color looking like paint dripping off the rocks.  Most of that orange color comes from the ubiquitous scrub oaks all over the lower elevations. 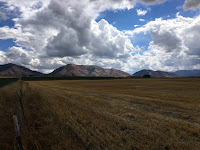 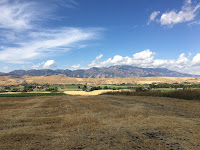 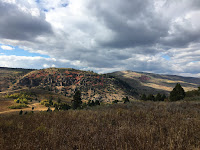 Nearly all of the remaining furniture for Debbie's office was delivered yesterday.  As I write this, it's sitting on pallets in our barn, still completely wrapped.  It will probably be the weekend before I can get to it – there's so much going on the next few days!  This shipment includes a shorter desk that (I hope!) will actually fit into Debbie's office, an office chair for her, and the refinished desktop for the longer desk that will go into my office.  So many projects to work on!  This one involves lots of physical labor for me.  First I have to carry the longer desk into my second floor barn office, all 300 pounds of it (in pieces, of course).  Then I have to disassemble Debbie's 200 pound desk and carry all the pieces from the barn to her upstairs office in the house.  Then I have to reassemble both desks and move all the stuff back onto them.  Yikes!

Then we heard from several contractors.  Promises, promises ... we got lots of promises.  The builder promises to be here “early next week” to frame the mud room.  It will be fascinating to see his interpretation of “early”.  Then the lawn and sprinkler guy, now three weeks late, promised to be here on Monday (and possibly even today).  So far he's promised about five dates and missed them all, so I'm certainly not holding my breath on that one!  Finally, our air conditioning contractor who wants to plumb my diesel and gasoline tanks called with some not-so-good news: he finally found a source for the plastic-coated pipe to run the fuel underground.  Why is that bad news?  Because of the cost: $8.50 a foot (and we need 120 ft), plus about $2.50 a foot for shipping.  Yikes!  We're doing some more research on that one!

Yesterday afternoon made up for all the tribulations of the day, though: we took an absolutely delightful drive around the area just north of Blacksmith Fork River (route at right).  We had Cabo and Mako along with us.  The roads were damp and occasionally muddy, but easily passable – and no dust!  We saw a bit of wildlife: one young bull elk, a few deer (with a couple of yearlings), an osprey (sans fish this time), and an assortment of hawks (one of which Debbie thought might be a golden eagle).  We also saw hundreds of cattle and sheep, which the dogs (especially Cabo) got all excited about.  Most of all, though, we had beautiful scenery.

Early in the drive we came across this little watering hole with a plant I don't know, and have never seen here before, growing in it.  What caught my eye was that from a distance it looked like a little conifer forest growing in the water!  A similar watering hole 50' away had none of them.  The second photo shows a closeup of the plant in question. 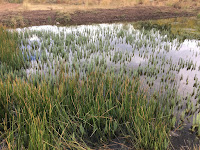 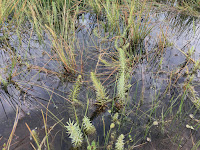 One of my neighbors liked to tease me that we were the only people in Paradise who had never been to Old Ephraim's grave.  Well, our route took us within about a mile of that, so we did a little dido and headed over there.  Old Ephraim was a large grizzly bear that was killing livestock at a prodigious rate, until a local man finally killed him in 1923.  I took a few photos to prove I'd been there :)  Note to my ursaphobic friends: there are no longer any grizzly bears in our area! 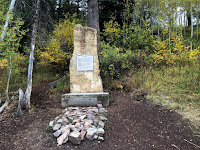 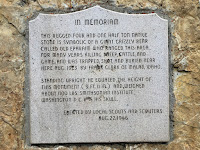 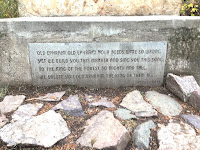 The fall color was the highlight of the drive.  The skies were mostly cloudy, but the occasional hole in the clouds would send bright sun rays down onto beautiful patches.  Most of the color was the reds of maples and oranges of scrub oaks (and a few larger oaks).  At the higher altitudes, the yellows and orange-yellows of aspen were just starting.  The next week should really be something!  Enjoy: 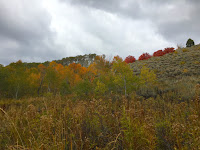 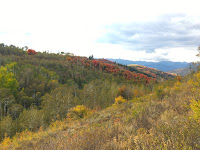 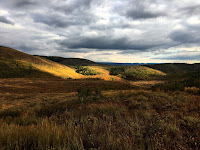 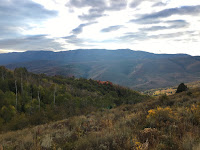 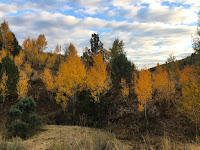 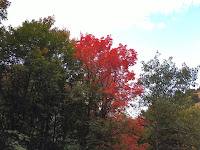 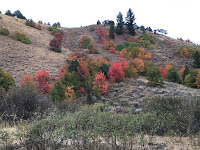 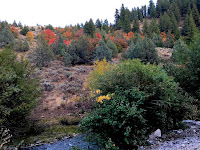 It's a beautiful place we live in.  It's really rather amazing to have stuff like this just up the road from our house...
Posted by Unknown at (permalink) 7:22 AM