Paradise ponders...  Well, we had a bit of progress on our construction projects yesterday, a relief to see after a week of nothing.  Our roofers came over, marked and cut the roof over the mudroom where the new gable will go.  That means the framers can now frame the roof on the mud room, and then the roofers can come put the new roof on that.  Nothing else happened, though – the fellow who's going to do our sprinklers (and grading) is now two weeks late, the framers a week and a half, and the custom doors we ordered are now three weeks late.  After living through this (and far more) doing our barn, I'm kind of used to it.  Debbie's ready to shoot everybody, just on general principle :)

I stared working on the electrical part of the sun room project.  The first step on that was some simple demolition work: taking off the siding on the part of the exterior wall that's now inside the sun room (photos below).  Once I had it down to the bare OSB sheath, I pulled apart the electrical wiring from the two old lights and a GFI outlet to figure them out.  It was oddly wired (no surprise there!), so it took me a bit of work to figure out what they did.  There were two light fixtures, one one either side of the door.  The outlet was near the floor on the right, and the light switch was on the inside, to the left of the door from this perspective.  I'm going to be installing three light fixtures, one in the center high up, the other two on either side of the door but further out than they were.  I'm also going to install an outlet on either side of the door, and a three-way switch both inside and outside the door.  I was hoping to re-use some of the existing wiring, but after scoping it all out I've concluded that it will have to be entirely redone.  Oh, well.  To get the wire installed behind the sheathing, I'll have to remove a horizontal strip of sheathing so that I can drill holes through the studs.  I can “fish” the wires vertically behind the sheathing without much trouble, but horizontally I have to do it the hard way. 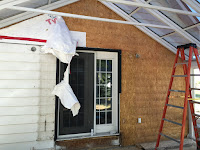 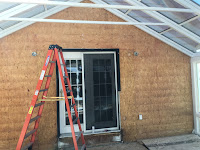 I've been walking with the puppies every day, generally on a route that takes us for a two mile round trip with about 700' of elevation change.  This is great exercise for both me and the puppies!  Yesterday morning on the way out, I spotted some interesting shadows (see photo at right, click to embiggen).  The giant sprinkler my neighbor was running spewed spray over a roughly 125' long swath.  His barn (yes, that's a barn in the photo!) casts shadows from the morning sun right into that spray, where they had an interesting three-dimensionality about them.  Meanwhile, our blue spruce nicely shaded my camera lens to make it possible for this almost-straight-into-the-sun photo.
Posted by Unknown at (permalink) 7:43 AM