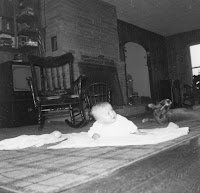 This one says “Holly” on the back, in my mom's handwriting.  It's dated (by the lab) December 1955, when she'd have been about eight months old.  It's taken in our living room, and Synda is rolling around behind her.  The fireplace doesn't have its mantle installed yet, but the nook to the left of the fireplace does have the shelves installed (where eventually there were 300 or so books that I plowed through).  The American flag was my mom's touch – she was always more demonstrative in her patriotism than my dad was.  His Great Depression memories, wartime experiences, and the craziness of the early Cold War made him much less certain of his faith in America (this I know from many conversations with him).  The arched entranceway to our dining room is visible on the right, and to the right of that archway is the old vacuum tube record player we had – monaural and awful, with a needle arm that weighed about a pound. :)  But we sure played a lot of music on there!  At the left you can make out that ancient black-and-white TV, also vacuum tube (and awful). 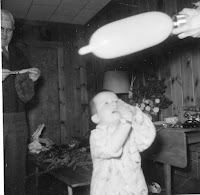 I believe this is my brother Scott, in a photo dated (by the lab) January 1958.  It's probably from Christmas 1957; Scott would have been four.  In the background is my paternal grandfather, Earle Dilatush, looking just as most of my memories of him before his awful automobile accident.  He nearly always had a happy, smiling visage, just like shown here.  He also dressed more formally (before his accident) than anyone else I knew at the time.  The photo was taken in our living room, looking to the east toward our little-used front door.  The holly table is visible to the right of Scott, and a coffee table I remember for being ugly (to me; I've never liked those modern designs) just to his left.  Scott is wearing a wrist watch, which seems a little odd to me now.  Did we really have watches at that age? 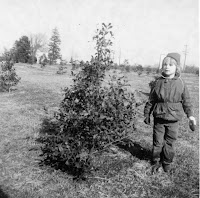 Here's my sister Holly in a photo dated (by the lab) February 1960.  She'd have been almost 5 at that point.  She's standing in the field to the east of our house, and the camera is looking north-northeast.  You can see the utility poles along US 130 in the background, and toward the left you can see a big house.  That's the home my ancestors built (legend has it) with a crew of Italian craftsmen brought over for that purpose.  It was three stories high with an unfinished basement.  Until about 1960, my uncle Donald (my dad's brother), my aunt Marion, and my cousin (adopted) Jonathan lived there.  When my parents were first married they rented the third floor from uncle Donald as an apartment, and I lived there with them for a year or so while our house was being built.  The house was eventually condemned by the County, mainly because the plumbing was all done with lead pipes.  After it was condemned, my dad, uncle Donald, my brother Scott, my cousin Jonathan, and I tore the thing down with nothing other than hand tools.  My paternal grandfather spent many days straightening the nails we pulled out, ending up with three old-fashioned wooden barrels of them.  The house was built in the last 1700s, we were told, and it was full of very old-fashioned materials and construction techniques.  The roof was 3/4" thick slate shingles, and those my father managed to sell at some profit.  The window screens were solid copper: horizontal, angled slats held together with twisted copper wire verticals.  Those screens would be worth a small fortune today!  The nails were all cut wrought iron: cut from iron sheets, then heated and hammered to make a nail head.  Practically the entire framing of the house was made of hardwood (mostly oak and maple), rough cut in a sawmill on premises, and shimmed to fit (apparently precision measurement was not a thing back then!).  There were two gorgeous staircases, with hand-carved newel posts and railings.  One flight of these was pulled out and installed as the basement stairs to our house, replacing a crude set my dad had built.  Getting that flight into our house was quite an affair!  Scott and I did quite a bit of grunt work on this project, and we crawled all over the entire house like monkeys to do it.  When I think back on what we were doing, it seems like a small miracle (or curse, some would say :) that we didn't get hurt or killed in the process.  I remember pulling slate shingles off the roof – three stories up, no safety rope, no roof jacks – just a kid in sneakers standing on a mossy, slippery slate roof trying like hell to pry the nails out of the fragile slate without damaging it.  I also remember how dirty and dusty the job was, especially when we were peeling off the lathe-and-plaster walls, and pulling out the rat-infested cotton batting insulation.  For better or for worse, we survived all that – and the house was reduced to an empty foundation. 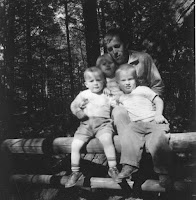 I like this undated photo.  I'm guessing (from the pines and the fence) that it was taken in Maine.  The adult is my dad, and left-to-right the kids are my brother Scott, my sister Holly, and me.  From our apparent ages I'm guessing this was taken in the summer of '57, when I'd have been almost five.  I have lots of memories of my dad when he looked like that, still a fairly young man (he'd have been 33).  We had some wonderful experiences hiking with my dad, the three of us.  My brother Mark was born so much later that our shared experiences were few and far between.  The three of us were close enough in age that we could do many things – like hiking – together. 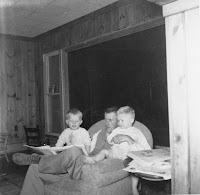 Here's another nice one with my dad, dated (by the lab) December 1955.  Left-to-right it's me, my dad, and my brother Scott.  The photo was taken in our living room, looking toward the southwest.  The room isn't decorated and he's sitting right about where the Christmas tree would be, so this must have been taken at least a few weeks before Christmas.  He's wearing a long-sleeved shirt with a knit vest, his customary winter in-the-house attire.  The big picture window doesn't yet have its “picture frame” surround.  The chair in the corner was one that I spent quite a bit of time in, though usually it was in the southeast corner of the living room, not the southwest.  Time spent there was punishment time for minor infractions that didn't warrant a spanking.  My parents were fairly conventional (for the times) in their punishments, except for washing our mouths out with soap (if we said bad things - only much later did we discover that our parents had extensive profanity vocabularies) and eating raw onions (usually prescribed if we didn't eat our food).  To this day I still get nauseous at the mere thought of eating a raw onion.  I think those affected me more profoundly than either Scott or Holly. 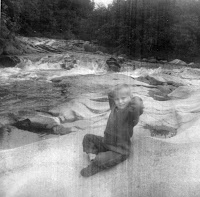 Finally there's this photo of me.  It's dated (by the lab) December 1959, but surely it was taken much earlier than that.  It looks like one of the rivers in Maine that we'd slide down the slippery rocks on, and that would mean the summer of '58, when I'd have been almost six.  There are several rivers in Maine flowing over smooth granite like this that are famous for the sliding opportunities.  It wouldn't surprise me if the nanny-staters in liberal Maine had prohibited this by now, or at least require protective gear.  We went down with nothing but our shorts or a bathing suit – had a blast, and at worst suffered a bruise or scrape that we laughed off.  I loved sliding down those rivers, and I was forever pestering my poor dad to take us to one of those places.  Thinking back on those experiences, I'm surprised that they were not crowded with people.  I remember a few people there on occasion, but usually it was just my dad and whatever group of kids he bundled along (that varied a lot, as he often had “borrowed” kids from other families who came up our cabin for the summer).
Posted by Unknown at (permalink) 6:43 AM