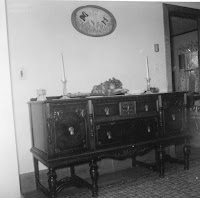 First up, this photo of a buffet in our home's dining room.  It's dated (by the lab) as February 1957, and in my mom's handwriting a note: “old buffet we used to have in dining room”.  That sounds as though she wrote the note long after the photo was taken.  I remember that buffet, especially the odd pulls on the drawers and doors.  I also remember those kitchen drapes (visible through the doorway at right).  Most of all, I remember that basket-framed “picture” of butterflies and plants.  In my memory (quite possibly faulty), those were all dried and under glass.  There's a ceramic thing on the left of the buffet that I can't identify at all.  I don't remember the rug on the floor. 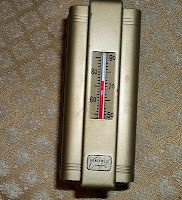 See the little vertical rectangle just left of the door frame in the preceding photo?  I'll bet most of you can't identify that!  It's a thermostat, a Honeywell model that I remember very well because I fixed the damned thing about 10 times! :)  At left is a closeup photo of that same thermostat that I found on the web.  That case was stamped sheet metal, ferrous (because it rusted).  Inside was a bi-metal coil with a mercury switch bulb glued onto it.  There were two recurring problems that I kept fixing.  First one was that the mercury bulb would fall of, making the furnace stuck either on or off (and both were bad!).  Second one was the coil would get slightly displaced (sometimes because the case got bumped, sometimes because of corrosion around the mounting screws) and then it would stick – again making the furnace stuck either on or off.  Somehow fixing that thing became my job, and it was usually tedious and involved cleaning teensy little parts.  I hated that thermostat! :)

Here's a couple photos of my sister Holly.  The first one is dated by the lab December 1958, and in my mom's handwriting on the back it says “Holly” – so I'm pretty sure I've identified it correctly. :)  Holly would have been three and a half in that photo.  I don't remember the skirt with holly leaves and berries on it.  I do remember the old table, and that tablecloth.  And that sure looks like one of my mom's insanely delicious pies on the table!  Through the arched doorway into the living room you can see the side of the holly table I've mentioned before (it's shining), and the shelf above it with my mom's fancy plate collection (far out of reach of curious kids).  The second photo also says “Holly” on the back, in mom's handwriting.  From her apparent age, this must have been taken in the mid-'60s.  As her brother, I can assure you that she wasn't nearly as angelic as these photos make her appear! :) 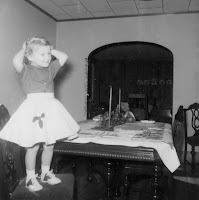 Finally, here are three more photos with me.  The first one is dated (by the lab) as March 1955.  I'd have been three and a half in that photo.  It's taken in our living room, with that fireplace that I remember well – though it's not quite finished in this photo, as the mantel is not yet mounted.  My dad is sporting that mustache that freaks me out, as I don't remember it at all.  Seeing that homemade fireplace screen made of copper tubing and iron screen brought a rush of memories, mostly of watching my dad make it.  That's about as close to a craftsman as he ever got. :)  I'm guessing that he took a stab at it only because they couldn't have afforded a store-bought screen.  I remember those fireplace tools, too – a gift from my dad's parents.  Left of the fireplace you can see a outset part of the room.  Later my parents lined this with bookshelves, filled mostly with books inherited from my paternal grandparents and Reader's Digest condensed books.  The window showing there is a serving “hatch” to the kitchen.  I have no memory at all of the little table to the right of the fireplace, and I can't identify the stuff on it.  The second photo is dated February 1961 (by the lab), when I'd have been eight years old.  If that date is accurate, then this must be somewhere in New Jersey or further south – perhaps Assateague Island?  The third photo is dated April 6, 1954 (by the lab) and has no notes.  It has to be me, from the date; I'd have been about 18 months old.  Note the exposed stud and wiring left of the chair – this was taken before my dad got the knotty pine paneling up in the living room.  Even at that age I liked putting my feet up! :) 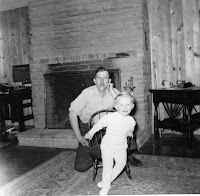 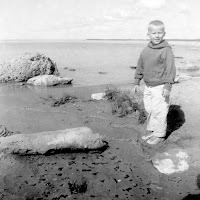 Posted by Unknown at (permalink) 1:36 PM