This is the house my parents built, in an undated photo.  I'm guessing summer of 1953 from the construction progress.  In the foreground is a donkey, which my mom named “Jack”.  On the back, in her handwriting (in fountain pen!), it says “Jack - our first pet!”  My mom mentioned Jack to me several times, but I have no actual memory of him.  She thought we had Jack until I was 4 or 5.  I once asked my dad about Jack, and he told me a slightly different story. :)  He said that he got Jack from someone who owed him money for some used equipment he bought from my dad – who just trusted him to pay for them some day (that's entirely consistent with dad's character).  When payment was not forthcoming, my dad took Jack in trade – his value was roughly the same as the amount owed.  But actually owning Jack was a serious pain in the butt – and my dad sold him as quickly as he could.  He was certain we owned Jack for less than a year, which means I was no more than two years old when Jack was sold.  That explains my missing Jack memories. :)

Here's a great one I'd never seen before.  Third from the left is my brother Scott.  I have no idea who the others are in the photo.  It looks like the woman second from the left, shaking Scott's hand, is giving out award plaques.  I can (just) make out the writing on the plaque at left:

Presumably William Atkinson is the name of the fellow holding it.  The woman at right is holding a plaque that has either 1st Place or 2nd Place written on it (I can't tell which); presumably Scott has the one she doesn't.  So I infer that Scott was in this contest in 1994 and won either 1st or 2nd place (and I'm sure he could tell me which!).  Possibly he could tell me who the other people are, too.


That was the first time I took an award of any kind. 1st place. The lady is the mayor of Virginia Beach.  Drury Baughan- the owner of the landscape job, gave me a $1000 tip as well. 3 years later I won 1st place again for the same contest. The people who took second and third place were my customers who had me landscape their entire yards. So when I walked out of there I felt like I won all 3 places in this contest. The mayor gave me a gift certificate for $100 to a store called Kettler. When I went shopping there everything was over a thousand dollars except for fiber doormats, so that's what I bought.

Here's a nice mystery – an undated photo in a place I don't remember.  There's nothing written on the back to give me a clue.  That Sears & Roebuck bell on a brick pedestal does seem familiar, but the rest of the scenery does not.  It might be my maternal grandparent's home in norther New Jersey, but I'm not at all sure about that.  The presence of a man wearing a tie makes that less likely. :)  From the cars it has to be the early '50s.  The “chef” in the foreground might be either me or my brother Scott.

This is my mom's father, my grandfather, Donald MacLaughlin.  On the back, in my mom's handwriting (in fountain pen) it says “Dad sleeping in his favorite chair”.  I'm fairly certain that the chair is in his “camp” along Long Pond in North Lincoln, Maine.  The photo is undated, but from his relatively young appearance I'd guess it's in the early '50s.  One thing that caught my eye in this photo was the massive ring on his right hand's ring finger.  I remember him letting me play with that ring, and it seemed huge and heavy to me – I could easily push three fingers through it...

Finally, here are some more photos of me and my siblings.  The first one is my brother Scott.  There's no date, but it's probably from 1958 or 1959 (from his apparent age).  On the back my mom wrote “Love this”.  The second photo is me on the left, Scott on the right, and for some reason we're kissing each other.  It's undated, but from our age must be around 1957.  The third photo is from the same series, left-to-right is me, my sister Holly, and Scott.  The fourth photo is undated and has no notes.  It's taken in our living room, looking west out the picture window.  I think that's me in the photo, but it might also be Scott.  I don't remember any of the toys in the photo, especially not the giant pile of blocks (that looks like something my dad might have done).  If that's me, I'm guessing I'm 4 or 5, which would make this 1956 or 1957.  The fifth photo is dated (by the lab) February 1, 1954.  In my mom's handwriting a note on the back says “Tommy’s first knowing Christmas”.  That would be Christmas 1953, which is the day my brother Scott was born; I'd have been 15 months old.  To the left of the Christmas tree you can just make out an unfinished wall: exposed studs with plywood on the other side.  We're occupying the house my parents built before it was actually finished on the inside.  This, I'm guessing, is the dining room and that plywood is from the kitchen (the one room that was finished).  It looks like I got a drum (can't believe my mom allowed that!) and a stuffed bear for Christmas.  I wish I could remember them.  The plastic Santa appears to be lying on sections of a model train track, but I don't think that can be right – I did get a model train one Christmas, but I was much older.  I have no memory of that rug.  Finally, the last photo me and Scott, laughing at each other – probably just after we kissed each other. 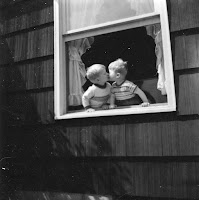 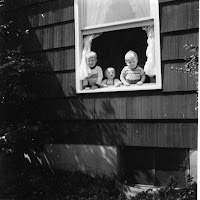 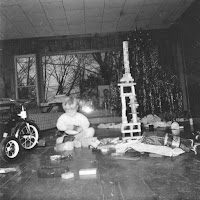 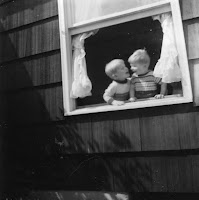 Posted by Unknown at (permalink) 3:08 PM