Paradise ponders...  The puppies are growing like little furry weeds.  I haven't weighed them, but I think Mako (the boy, and biggest) is getting close to 30 pounds.  The two of them continue their roughhousing, but with sharper teeth and (much) more muscle behind it – whenever I get in the way, I come away with cuts and punctures :)  In the 90 second video at right, you can see them being puppies – but after they spent 10 minutes beating each other up.

Race (our adult border collie) is especially tolerant of the puppies.  There have been quite a few times when he had two puppies hanging off him (on his ears or lower jaw), and he just keeps playing.  Miki is getting a bit more tolerant of them, though he still does lots of growling and will nip at them when they're especially bad (say, when there's one hanging on each of his ears!).  Both of them are still doing great: 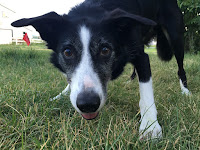 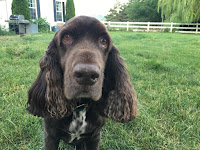 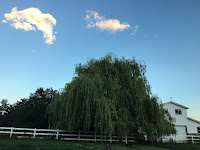 When I first took the dogs out this morning, it was still a half hour or so before sunrise. The high clouds overhead, though, were fully lit. This made for a pretty high-contrast scene that isn't quite faithfully captured by my camera.  Our eyes have an essentially logarithmic response to brightness, whereas the camera's image sensor is linear.  This makes it nearly impossible to photograph a scene with very high contrast and have it look like what your eye sees.  Someday someone is going to make a log response sensor, I just know it.  Photography will get ever so much easier when they do :) 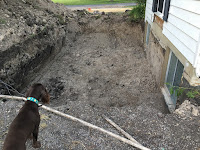 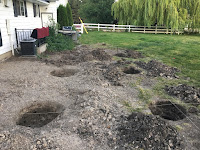 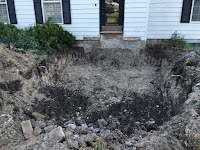 The first photo shows the yawning pit outside our bedroom, where the sun room will go.  Notice the basement windows are fully exposed, and the old steel casements are gone.  Each of those windows will get a poured concrete casement, with an area 50% larger than they used to be (to let more light in).  Then a seven-sided foundation (7 sides of a regular dodecagon) will be poured, a conventional joist floor built, and the sun room installed on top. 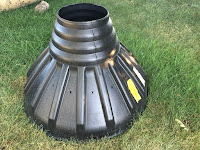 The middle photo shows the craters outside our kitchen window.  These are where the six footers for our deck will go.  These footers will be poured concrete, using the “BigFoot” forms at right.  A cardboard tube is inserted in the top of this form to make the complete footer.  We'll have larger ones at the outside (farthest from the house), as those footers will be supporting both the deck and the roof over it.  The deck will be redwood on top of treated joists, with 18" of crawl space underneath.  The area under the deck is where nearly all of the underground services enter our house (power, water, septic, cable, phone, and gas) and where services to the barn leave (water, gas, and network).  You have to be mighty careful digging in that area!

The last photo shows the area outside our front door, where we used to have a brick walkway and a large poured concrete porch.  Now there's just this giant hole :)  Here there will be a mud room, roughly 10' x 12', built on conventional footers and foundation.  It will have a porch that is semi-circular, seen from above, made from concrete faced with rock.  That porch will be fairly close to our driveway, so we'll need a much shorter walkway.  This will also be of rock.
Posted by Unknown at (permalink) 6:35 AM