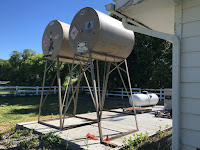 Paradise ponders...  This morning I finished setting up our fuel tanks (shown at right), one for diesel and the other for gasoline.  These are 500 gallon tanks on 8' high stands that I bought used from a local company that bought a bunch of them from North Dakota fracking sites.  They're in great shape, and the price was certainly right: the two of them with stands cost about half what a single new tank would cost, without a stand.

The fellows who delivered the tanks set up the first one (on the right in the photo), but the second one they didn't.  I had to put together the stand (easy, just bolts), and then put the tank on top of it.  That second part took a little ingenuity to do by myself :)  I used the fork on my tractor to put the tank on the ground.  I rolled it so the bottom was exactly perpendicular on the right, then laid the stand down sideways on the ground.  I used ropes to lash the tank to the stand, so I effectively had one unit – and then I hoisted that single unit up with my tractor's fork.  None of that required much muscle.  Tractors are handy!

The tanks are only the beginning of a fueling system, though :)  From each tank, there's (in order) a shut-off valve, a water/sediment filter, 30' or so of underground pipe, an 8' high riser, a pair of elbows and nipples to get the pipe headed down (like an upside-down "U"), a swivel, a safety breakaway, 12' of hose, and an automatic shutoff nozzle.  The underground pipe has to be black iron pipe coated with plastic, and joints have to be waterproofed (this is to stave off corrosion).  All those other parts are on order and should be here next week, and I have a contractor lined up to do the black iron pipe work (that needs cutting and threading that I lack the tools for).

At the end of all this, roughly a month from now, we should have diesel (untaxed, because it's just for my tractor!) and regular unleaded gasoline on tap.  The gasoline, purchased a few hundred gallons at a time, will save us about 15% on fuel prices.  The diesel is more like 30% cheaper because we won't pay highway taxes on it.  Then, of course, there's the convenience – hard to beat having fuel alongside your driveway!
Posted by Unknown at (permalink) 12:44 PM