It's really hard to beat... 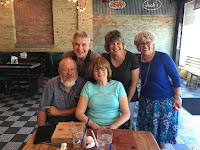 It's really hard to beat ... meeting up with old friends, which is what we did for part of yesterday.  Despite our sketchy appearance, the folks at Jack's Wood Fired Pizza let us in for lunch (trade was slow, admittedly).  For those of who don't know us, that's Debbie and I in the lower row.  Left-to-right in the upper row is Doug W. (whom I've known for over 25 years – he and I worked together at Stac Electronics), his sister Marilyn (who lives fairly close to us, in Ogden), and Doug's wife Dee.  As always, their visit was too short for us – but it was really nice to see them again.  Doug gets up here to northern Utah a couple times a year, mainly for church-related activities, and Dee often comes with him for activities of her own.  We have some hope of seeing them once in a while :)

Yesterday was also a big day for Debbie: this was her first time out to a restaurant since her injury in late May.  Jack's was a great selection for that outing, with their delicious soups and pizzas, and this time complete with great company!

If you're wondering who took the photo, it was our waiter.  He told me that he took two photos, in case one didn't turn out.  In fact he took four, all just a fraction of a second apart.  I suspect he's not an iPhone expert :)
Posted by Unknown at (permalink) 3:21 PM