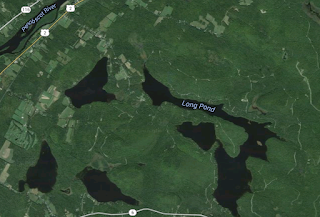 Long Pond...  North of the town of Lincoln, Maine there is a body of water named “Long Pond” (Google Maps satellite view at right).  Maine has a lot of bodies of water, some quite large – so what they call a “pond” in most places would be called a fairly large lake.  Out here in Utah, Long Pond would probably be a national park :)

My grandfather – my mother's father – bought a few acres of land along the side of that pond back in the 1940s.  It was located on the western leg of Long Pond, on the south shore, accessed via Sweet Road.  My grandfather had a slew of fishing buddies up there, and they had a grand time each summer when he went up there for his vacation.  They fished, drank (lots of) beer, played cards, cussed, told stories, and played outrageous pranks on one another.  Adding to the charm was the presence of a good many “characters” who lived up there year-round.

My mother grew up amongst this joy and carousing, and for her it was some of the very best that life could deliver.  Of course she came to associate that with the place – the beautiful country that Long Pond was a part of.  The people there were also a major part of what made that place special to her, just as the people here are a big part of what makes Paradise, Utah special to Debbie and I.  Mom had a million stories about Long Pond, and every one that I can remember now involved someone there.  That's very different than the stories I remember about my dad, as often those stories involved wild places and plants – but not people.  I suspect my introversion was inherited from my dad; certainly my mom's genes did not contribute to that at all :)

Long Pond was my mom's favorite place on the planet.  Her explicit wish is to have her ashes scattered over Long Pond, so that she can “look up” to see the fish and the loons – and her son, Mark, fishing there just like her father did.  We will be honoring those wishes when we can arrange a time that works for everyone who wants to be there; tentatively that's going to be in June 2017.

Mark now owns that land alongside the lake, and he's in the process of building a new “camp” for his family to use.  His children grew up enjoying and loving Maine much as my mom did, and I suspect his grandchildren will do the same.

That is just how my mom would have wanted it...

Posted by Unknown at (permalink) 8:15 AM