Every box tells a story... 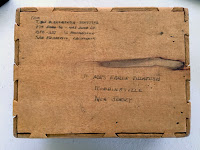 Every box tells a story...  A few weeks ago, while at my mom's old house in Virginia, I was searching for my dad's old Army records.  He served in the Army Air Force in WWII, as did his brother (and my uncle) Donald.  In that search I came across this small wooden box, about 8" x 6" x 3".  A photo of its lid is at right.

From the return address you can learn a lot.  My uncle Donald was a Technical Sergeant, specializing in radio and radar repair for the B-29 “Superfortress” bomber (photo at left).  He was assigned to the 875th Bombardment Squadron of the 498th Bomber Group, and he was stationed in Saipan from late 1944 through the end of the war in late 1945.  That dates the box to sometime in that period, and tells us that it was sent from Saipan.

Like many of his Army Air Force contemporaries, my uncle Donald had a secondary assignment: belly gunner in the tail belly gun.  He didn't like to talk about the war at all, but one day while we were searching on our farm for Indian artifacts, he told me that he flew on around 70 bombing runs over Japan.  On most of those missions he never fired his guns (except for testing) – American air superiority was so complete that usually the only defense was anti-aircraft guns from the ground.  Nevertheless, being a belly gunner was a risky proposition – should anything cause the aircraft to make a belly landing, you would end up being a smear on the runway.

One thing about my uncle that long surprised me: though he was a highly trained electronics technician, when I knew him (after the war) he never demonstrated either interest in, or knowledge of, electronics.  His post-war profession was accounting, which seems like an unlikely career course for someone so highly trained in then-exotic electronics.  To this day I have no idea why he abandoned electronics.  His older brother, my uncle Earle, was a noted electrical engineer (worked for Scott making transformer-coupled hi-fidelity tube-based amplifiers) who then transitioned into writing for and then editing one of the major publications in the field (EDN).  I guess uncle Donald didn't get those genes :)

The box itself is hand made from 3/16" plywood – three plies, aircraft grade.  It's probably spruce (as this was most common in WWII), but could possibly be birch.  From the broad grain, though, I suspect it's spruce.  This plywood is a material that could be found in any aircraft mechanic's shop at the time – it was the go-to material for interior partitions, cabinets, and so on, so uncle Donald would have had easy access to it.  The dovetailing is hand-done, with a chisel or possibly a knife; sharp blade marks and grain deformation are clearly visible, so it wasn't cut with a saw.  The dovetails are only approximately placed, as though they weren't even measured but just eyeballed.  Similarly, the dovetail widths vary by as much as an eighth of an inch.  I'm fairly certain uncle Donald made this box himself – as I saw him make some similar boxes in the '60s, using thin teak plywood.  When I watched him make such a box, he used an ordinary pocket knife and wood glue to do the entire job.

Then there's the address the box was sent to.  Mrs. Earle Dilatush was my grandmother, and uncle Donald's mother.  Her address doesn't even include a street, much less a zip code (which didn't exist back then) – just her name, town, and state.  At the time Robbinsville was quite a small village, located a few miles north of the farm where she lived – but still, that's all that was required for a letter or package to get to her.

Inside the box you can see fine particles of sand and shell embedded in the wood.  It's possible those particles got there long after the box was originally sent.  But it's also possible – likely, I think – that those particles are actually from Saipan.  My uncle was an amateur archaeologist, and he did some of the very first archaeological field work with the native settlements on Saipan.  He even had an article about his work in Saipan published in a professional journal, despite his (utter) lack of credentials.  His letters mention several hundred pounds of artifacts that he collected on Saipan and shipped back to his mother.  I'm sad to say that I never saw a single one of these artifacts, and I have no idea what happened to them.  But I'm guessing that this box was used to ship one (or some) of them back to his mother – and probably particularly interesting artifacts, given the care taken in making this box.

There you have it: every box tells a story (with apologies to Rod Stewart)!
Posted by Unknown at (permalink) 2:33 PM