Paradise ponders...  Oh, we had such a good day yesterday!

For starters, the weather was just about perfect.  We had wall-to-wall blue sky, and the temperatures were in the high 50s or low 60s all day long.  I worked inside most of the day (on my new office), but every time I went outside I reveled in the beautiful weather.  A fine day in Paradise! 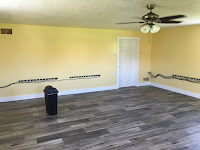 First job yesterday on the new office was cleanup time, and the result is at right.  You'd hardly recognize that as the same space that looked like a bomb went off yesterday :)  It was quite a bit of work to get all that mess cleaned up.  I must have bent over 1,000 times as I picked up trash and threw it in a big plastic bag.  Then I vacuumed with a Shop-Vac, using a narrow tool to maximize the suction.  That took a couple hours, including periodic unclogging of the nozzle as I tried to pick up something that was too big.  Finally I mopped the whole floor with a sponge mop, using two buckets and a Pine-Sol solution.  The result looks great, especially in relative terms :) 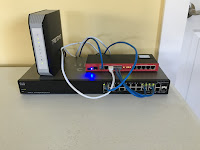 The next step was to move the networking kit from a shelf just outside my new office to a table inside.  That doesn't sound like much, perhaps, but it involves quite a bit of new network wiring and lots of unplugging and replugging.  Past experience with such moves suggested to me that success would come only after a bunch of debugging, but such pessimism was unwarranted yesterday: everything worked on the very first try.  This was not what I expected!  The photo at left shows the networking kit happily humming along in its new location.

The last thing I did on the office last night was to move our Mac Mini server from the house to the shed.  I set it up, reassigned its IP address (it's on a new range out in the shed), and fired it up – and it all just worked.  First try.  At that point it was late afternoon, and I was tired – so I figured I'd better quite while I was ahead :)  This was also the last thing I had been hoping to get done yesterday, so I was on my self-imposed schedule.

Today I am moving my MacBook Pro and its associated paraphernalia.   That will take a while, just because there are a lot of pieces – but it should go easily.  Just a lot of walking and carrying :)  Tomorrow my brother Scott will be here to help me with the heavy bits – most especially the monster of a printer I have (an HP CP4025).

I walked between the house and the shed many times yesterday, and each time I got to enjoy the yard in springtime.  Toward the front of our house, the air was full of bird song.  The birds feeding on our feeders are starting to get used to my presence.  They used to all fly away simultaneously if they spotted me 100 feet away.  Now they fly away only when individual birds get alarmed, and some of them will let me get quite close.  The boldest of all is a (yet unidentified) woodpecker, who will feed on the suet feeder until I'm within about 6 feet.  Second boldest are the American goldfinches, some of which will keep feeding until I get about 10 feet away.  The pines above our feeders are full of perching birds waiting for their turn on the feeders, and those birds are singing their hearts out all day long.  A lovely serenade on my transits between house and shed, it is.

Then there are the flowers.  I'm not sure what the tree in the first photo is, but we have a row of five of them along the south side of the shed.  The biggest of them is close to 30' tall.  Right at the moment they are in full bloom, and their perfume fills the air near them, as sweet as any lilac.  Just like the lilacs, their scent is so powerful that if you inhale through your mouth, you can taste the smell.  This and the lilacs are the only two flowers I've ever been able to do that with.  The second photo is a few of our red tulips, then there's a columbine (that won't bloom for a while yet), and finally the lilac that we inherited with the house.  It looks much happier this spring than it did last spring.  The seven lilacs that I planted last fall are out in leaf now, but I don't see any hint of flower buds on them. 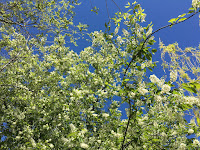 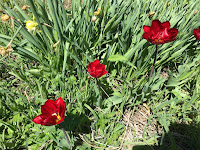 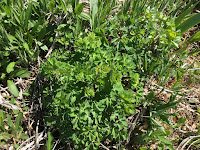 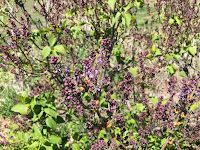 Late yesterday afternoon we took a drive up the road that leads to Liberty.  This is a dirt road, parts of it rough enough to warrant using a 4WD vehicle, so we took the FJ Cruiser.  Of course we also took Miki and Race with us.  When we let them out the front door to “load up” in the FJ, their excitement was fun to watch :)

It was a relaxing and beautiful drive.  It's hard to beat springtime in the mountains.  The second and third photos I took from the FJ's window – look closely and you'll see a nice, fat skunk waddling around.  Just prior to this spotting we had been talking about letting Race out to swim in the stream.  You would have heard no such talk after this sighting :)  The three photos of the little blue flowers were all taken in the same tiny patch.  For about a mile in the lower elevations, these flowers were scattered amongst other stuff on a north-facing road bank.  I have no idea what they are.  The last photo was my poor attempt to capture something that was very striking looking in person: a valley completely in shadow except for one solitary tree that was brightly lit up. 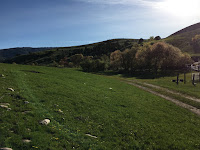 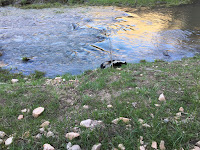 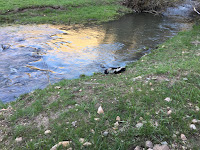 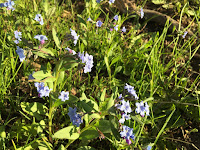 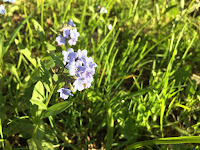 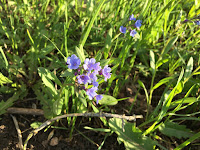 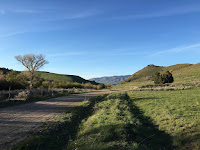 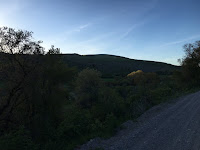 Posted by Unknown at (permalink) 5:15 AM