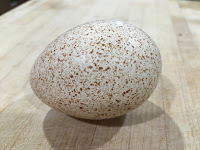 Paradise ponders...  Do you know what's in the photo (mine) at right?  It's a turkey egg, given to us by Michelle H., a friend here who has some laying turkeys.  What a pretty egg!  Makes chicken eggs look downright boring.  She also gave us some duck eggs, three of which I used to make deviled eggs yesterday.  Their yolks taste a bit richer than chicken eggs – those were darned good deviled eggs!

Debbie is at the Field Spaniel Society of America's annual national convention today.  By coincidence, this year it's being held at the fairgrounds in Logan, just 12 miles north of us.  There are a lot of beautiful field spaniels up there right now!  Debbie's up there this morning with Miki, and they're entered in the dog agility competition that started at 7 am this morning.  I'm back home taking care of the five kittens we're fostering, and hoping that Debbie doesn't do anything silly to re-injure her knee.  I'm hoping she'll find a friend to record video of her run – this is a big, big deal for her, as it's the first competition she's entered in over three years, since her bad knee injury in November 2012.

We both were at the convention yesterday afternoon, delivering four 10 quart containers of Aggie's ice cream for an “ice cream social” they had scheduled.  Much to the surprise of the organizers, these folks didn't eat so much ice cream – there was over 30 quarts left over.  Those leftovers are now in our deep freeze.  Since we're the only locals attending, we got all the leftovers.  Debbie and I decided that it would be unduly injurious to the FSSA's finances were we to make them pay for all that ice cream, so we're going to donate the 10 or so quarts they actually ate, and keep all the rest for ourselves.  Darn the bad luck!  Now we'll have to suffer through vast quantities of Aggie's vanilla, chocolate, caramel cashew, and chocolate almond ice cream.  Dang it!  :)

We just might invite some neighborhood kids over for an ice cream Saturday sometime.  Without much trouble I'm pretty sure we could rustle up 50 or 60 kids.  Probably just by shouting :)
Posted by Unknown at (permalink) 6:35 AM