Of Debbie, mom, puppies, and kittens...

Of Debbie, mom, puppies, and kittens...  What an eventful week this has been!  And I thought retirement was going to be calm, peaceful and relaxing...

Debbie and my mom are both doing just fine, and so are the puppies and kittens.

Debbie had her surgery on Tuesday, and the results were good: the surgeon (Dr. Rowley) was happy with the way he put the pieces back together.  There were six bone fragments after her break, and it took a steel plate and seven screws to hold it all back together in the right place.  Dr. Rowley said she should expect full knee function back after recovery; there was no significant compromise of the socket surface.  She probably did have a meniscus tear, and if it proves problematic she may need a minor arthroscopic surgery later to clean that up.  Her recovery process is identical to that of two past injuries she's had to her right knee: no weight bearing at all on her left knee for the next 12 weeks.

In her past injuries, only one leg was affected.  This time she also broke (cracked) her right patella (knee cap).  No surgery is needed for that knee, but for the next six weeks or so she can't bend that knee.  She can put weight on it, but no bending.  That means that for about six weeks she can't bend either leg, and that makes almost any kind of mobility much more challenging.  Because of that, they've transferred her to a transitional care unit (TCU), where the nursing staff will take care of her until she learns how (with the assistance of some physical and occupational therapists) to do some basic things safely: get in and out of bed, go to the bathroom, take a shower, etc.  They're guessing she will “graduate” from this course around Tuesday or Wednesday, and then she can come home.

My mom made it safely to Utah, accompanied by my niece Amber G.  She never needed the oxygen that gave us so much grief the prior week.  The manager of the Williamsburg independent living home (Dan H.) was at the airport to pick the two of them up, and they drove the 90 minutes to Williamsburg without incident.  All of her luggage arrived safely, we've got her in her room (which she seems positively giddy about), and she's regaining her strength after the rigors of travel.  Her spirits seem to be soaring.  The hospice folks here who will be taking care of her have been right on top of things, with care much better than I'd have expected.  She even had a musical therapist visit to sing and play music for her!  So far our impressions (including hers) of Williamsburg and the hospice are very positive.  We're hoping it stays that way.  The staff there seems to enjoy my mom, whose personality is just a tad ... different ... than that of most of the other residents.  Not only is she not LDS (as most of the residents are), she's a lot more boisterous and talkative than they are.  She also has a much more colorful vocabulary, which the staff seems to be quite amused by.  Craig, the handyman there, turned to me when I came in yesterday and said “Your mom’s a hoot!” – and further said that he was really going to enjoy his visits to her room :)

The puppies?  Well, they're puppies!  So of course every time I get to play with them I have a ball!  I've got a few puppy and kitten photos below.  Mako and Cabo are taking to their new home very well, and Race and Miki almost instantly seemed to realize that they are new family members.  The two adult dogs both play very sweetly with the puppies.  Race is especially cute, as he'll bring a stick or a pine cone over to them and tease them with it.  Several times he's been carrying a big stick while two puppies are attached to either end – and he very gently pulls it around while they're wrassling with it.  So, so cute and endearing that is...

The kittens are all health and growing, and the mom kitty has weaned them.  The mom looks good too – she had an eye infection earlier this week, but that's completely gone now.  Soon they'll be getting their shots, being neutered, and finding a home...

Through out this past week, our friends and neighbors have been helping me.  Without them I'd have had some real problems.  Two of them especially stand out: Michelle H. has been coming over to our house several times a day to care for the animals, and Tim D. has been handling any other contingency that came up (including even mowing our lawn!).  Debbie's had a steady stream of visitors, thanks to them.  This attention just underlines what a wonderful community we ended up being a part of.  We feel so lucky to have picked this particular spot, and so grateful for the help that we needed... 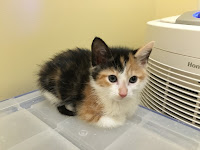 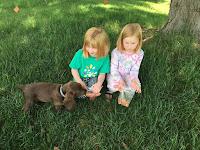 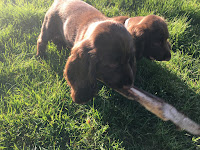 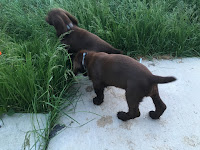 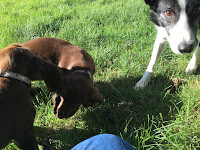 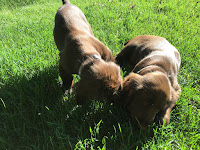 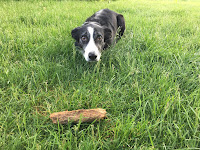 Posted by Unknown at (permalink) 6:58 AM