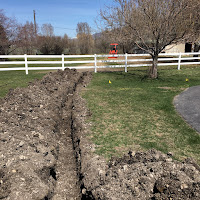 Tim and I got about 2/3 of his new trench dug, and (the best part!) we have finished all the parts where we might hit things like buried gas lines, irrigation pipes, and wires.  It's all clear sailing from here.  If you look carefully in the photo at right, you can see my (orange) tractor in the distance.  The well, which is at the other end of this ditch, is about 15' further than the tractor.  I stood at the point where the ditch takes a short left turn to enter Tim's house.  It's about 130' all together.  The original trench that we dug in the same spot was 48" deep; the new trench is only 18" to 20" deep, which is why it's going so much faster :)  The tractor (a Kubota B26TLB, like the one at left) performed flawlessly all day.

We knocked off at around 2 pm because Tim had to go to an obligatory baseball game that his grandson was playing in.  Debbie and I decided to go have ourselves a lupper out, at Jack's in Logan.   There we each had a bowl of homemade cream of mushroom soup that was just outstanding, and then Debbie had a Cozumel mini-pizza (left), and I had their Teres Major mini-pizza (right).  Both were, as usual, wonderful: 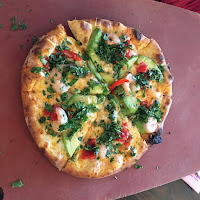 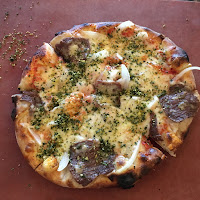 As if that weren't enough, we then traveled (the long way around, because I got turned around) to the Aggie's Creamery to have some ice cream.  We both got the same thing (first time evah, I think) – a two-scoop cone with chocolate almond on the bottom and caramel cashew on top.  The tastiosity was quite high :)

On the way home we reflected about the high quality-to-price ratio of the meal we just had.  The total tab (Jack's and Aggie's) for our meal was $36.05 – that's soup, pizza, drinks, and ice cream for two, including a generous tip.  The food was all outstanding, front-to-back, the portions generous (we took some home), the service full of smiles and good cheer, the atmosphere friendly and even the other patrons were pleasant to be around.  I'd have been perfectly happy paying twice what we did – and in San Diego, I would have.  There's no way the San Diego ice cream would have been as good, though – and most likely not the soup, either.  The pizza would could probably find the equal of.

I love living here, in a postcard...
Posted by Unknown at (permalink) 3:50 PM