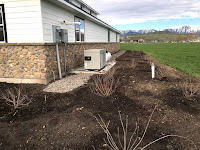 Paradise ponders...  This time, with photos :)

My brother Scott and I spent a good part of yesterday planting sumac on the north and west sides of my barn (the result is in the photo at right).  These are just barely starting to bud, but hopefully in a couple of weeks we'll have lots of green around the barn, the weeds will be at least slightly suppressed, and they'll start spreading.  These have a beautiful red fall color, too.  Scott's coming over again today, and we'll put down a bit of fertilizer and then some wood chips as mulch.

Yesterday evening we helped my neighbor Alan L. move some trees: a couple of maple saplings, and several clumps of choke cherries.  We're going to finish that job by moving the last of the choke cherries on Saturday. 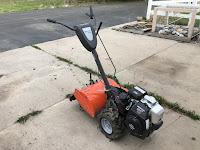 The little Husqvarna rototiller that I used to break up the dirt for the sumacs is at left.  Aside from breaking a shear pin, it worked without any problems for the entire job.  One thing surprised me in a pleasant way: the last time I had used it was in June of 2014 – close to two years ago.  It had been in our garage ever since.  Yesterday it started on the second pull of the rope.  Love those Honda engines!  It's sitting outside now until the mud dries completely – then I can chisel all that mud off and put it back in the garage.

Our yard is starting to get some flowers, and color!  Spring is springing!  From left to right: a flowering plum (I think) near our garage, daffodils out in our “garden”, periwinkles right next to the daffodils, some pretty new growth that I have no clue what it is, and something we have a lot of around the front of our house that my brother Scott tells me is spurge.  From that linked article you can see that Euphorbia comes in lots of flavors, some of which look nothing whatsoever like the stuff in our yard – but some of them, if you drank enough, might have some resemblance... 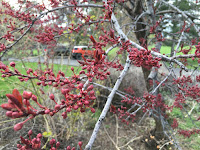 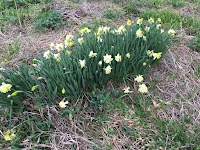 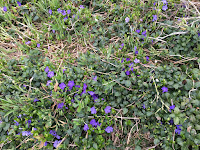 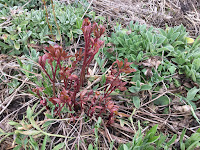 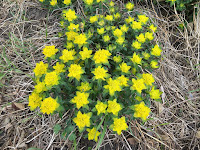 Posted by Unknown at (permalink) 8:17 AM