Paradise ponders...  Yesterday afternoon we took a ride up to Hardware Ranch, looking for wildlife.  We saw about a bazillion deer – we joked that it was easier to say where there weren't any deer, and that's not too far off what we saw.  The most interesting deer we saw were climbing around a rock outcropping like you'd expect goats to be doing (they're in the crummy photo at right, which was blown up from a non-telephoto shot).

We also saw a moose browsing alongside Blacksmith Fork River.  After watching him for a little while, we realized that its left rear leg was badly injured.  It's still able to stumble around, but I'm pretty sure it couldn't run.  We're hoping it survives, but it looks pretty bad.

After the drive, we headed to Le Nonne for dinner.  Once again we had a delicious meal.  We shared a burrata appetizer (below, left) and then I had an entree of Alaskan Snow Crab ravioli (below, right).  Wonderful!  Debbie had bow-tie pasta with salmon, also wonderful.

The food was most enjoyable, but the service ... not so much.  We had a waiter who was obviously of the opinion that one cannot possibly be too pretentious.  One example: he noticed that I wasn't using the straw he'd placed on the table, so he asked “Will we be using our straw tonight?”  I was sore tempted to tell him where “we” could shove that straw.  But I was good; I didn't do that :)  That experience had us both talking (after we'd left the restaurant) about how nice it was to live in a pretension-free zone.  Well, nearly so, anyway.  People here are, in general, about as down-to-earth as they could be.  That general absence of pretension makes displays of it (as we experienced last night) stick out like the proverbial sore thumb.

We'll be going back to Le Nonne ... but most likely not as soon as we would if the staff were (a lot) less pretentious.  We've noted that a good fraction of Le Nonne's customers seem to be faculty and staff at Utah State University; the high levels of pretension may play better with that crowd :) 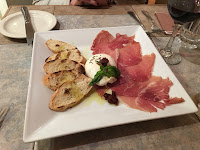 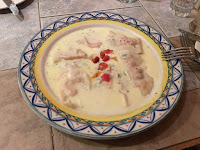 Posted by Unknown at (permalink) 9:57 AM