Christmas in Paradise...  We went to sleep last night with our heads full of beautiful memories...

In the late afternoon we set off to visit with our closest neighbors (Alan and Nikki L, with their brood of six kids) carrying two bags full of Debbie's homemade chocolate chip cookies.  One of the bags we marked “For Alan” and the other “For everyone else” – because the last time we gave them cookies Alan didn't get very many :)  We had a happy, friendly visit with them, as they were madly preparing for Christmas.  One of those preparations happened to be a plate of sugar cookies for us; Gracie (their oldest daughter) madly finished them as we were all talking.  We left with cookies and a bag full of oranges (they had a surplus!).

Then we left for our second-closest neighbor's house: Nick and Maria S., with their six kids.  They have three daughters and one son, plus two little ones that they recently fostered.  A couple of weeks ago Maria invited us to spend Christmas Eve with them, for a light meal of soup and bread, Christmas music, and a nativity scene reenactment by their kids.  Maria, in particular, is locally famous for her musical talents and most especially for her singing voice.  She offered to have the family sing our favorite Christmas music!  How could we turn that down?

Never having participated in such an event in this community, we really didn't know what to expect.  Debbie was worried about how to dress, but since nobody said anything about dressing up, we went in our usual casual clothes (for me, that's darned near everything piece of clothing I own!).  Luckily for Debbie's equanimity, that was the right choice :)

From the moment we walked in, we felt right at home with the family.  While the kids (especially the two little ones) were whirling around dispensing chaos and noise in every direction, the rest of us talked and fussed about getting the meal put down.  Maria had made Italian wedding soup, cream of potato soup, and some nice sourdough rolls.  Debbie had made an orange cake for dessert.  The meal was full of good conversation, along with the occasional minor disaster perpetrated by the little ones (fortunately none of them caused permanent damage, though a great deal of water was sopped up with towels).

After that most pleasant meal, we all repaired to their living room for the musical segment.  Maria played piano and sang softly while various other family members alternately participated with the songs they new.  Their son (Nick) often accompanied her on his cello – sometimes with some challenges for both of them to get in the same key :)  Their four children all have lovely singing voices, and quite obviously know a lot about music, and they have a great deal of fun making it.  The highlight for me, though, was a solo piano-and-singing performance by Maria: Ave Maria, in Latin.  The link goes to a YouTube performance of the same version – not by Maria, of course, but very similar.  It was most beautiful to hear such music performed live right next door to us.  I snapped the first four photos below while the family was singing.

After Ave Maria, the family did their traditional reenactment of the Nativity (the last two photos below).  Maria read the script from an iPhone, while their kids acted the various parts.  The cradle was actually made by Nick, for their two oldest kids.  I was struck by how much fun the kids had doing this – making some improvised costumes, fussing over who got to play which parts (their were more parts than kids :), and acting out the script.  There were lots of laughs and even more good cheer, and all the while the kids were getting their religious beliefs reinforced. 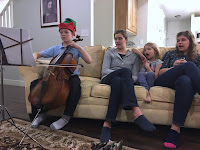 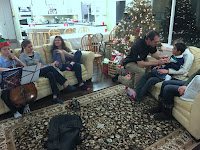 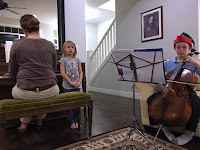 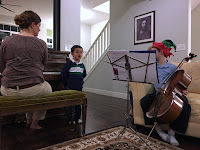 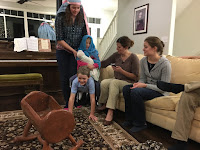 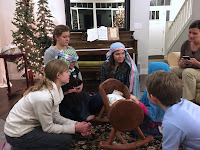 As I hope you can imagine, we parted with warm feelings and big smiles...

This morning we awoke late (for us): almost 5 am.  The moon lit the snow-covered landscape quite brightly.  Debbie spotted Jahar (our Savannah cat) watching something outside the window very intently – deer, six does wandering slowly across our yard.  They investigated our bird feeders, even smelling the suet feeder, before heading for our little pine forest.  That was a very nice way to wake up on Christmas morning!

We had our morning tea and coffee with a panettone that Debbie had found on Amazon.  This was a variation we'd never had before: pear and chocolate.  I don't know how the Italians make the fruit they put in a panettone, but however they do it, it's the best I've ever had in a bread: no sweeter than the real fruit, not dried out but still soft and full of flavor.  The bread part of this one was hands-down the best I've ever had.  We ate nearly half that panettone – somehow I'm not hungry any more :)

Later today we'll be making a new recipe Debbie wants to try out: a casserole of roast chicken and lots of veggie goodness, with biscuits on top a bit like dumplings.  It looks good in the recipe!  My brother Scott will be coming down to join us, so we're expecting there will be no leftovers, despite the recipe being for 8 servings.  If Scott needs even more sustenance, we have plenty in the freezer :)
Posted by Unknown at (permalink) 5:59 AM