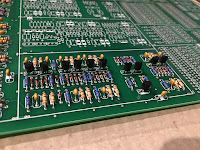 Paradise ponders...  This morning I built the seconds counter on my clock kit (photo of that section at right).  It all worked on the first try.  When I put my 'scope on the output of the 2^3 flip-flop, I saw a “0” for 8 seconds and a “1” for 2 seconds, repeating in that 10 second cycle.  That's exactly what I should see there, because that flip-flop is only set when the seconds counter contains an 8 or a 9 – which it does for 2 seconds out of every 10.  The other three flip-flops in the counter also had the expected patterns.  My next assembly effort will be the seven-segment decoder logic, the seven-segment LED driver, and the LED itself.  When I get that done, I'll see the seconds for the clock counting up!

Yesterday I started installing some network cables in the house.  The first step was to run two CAT-6 cables from the basement “mechanical room” up into the attic.  I ran them alongside the chimney, where there's already quite an assortment of pipes and wires running.  Today I'm hoping to run them from the attic down through a wall in our second floor office, where I'll terminate them in a wall panel.  One of those wires I'll be connecting to the underground CAT-6 that runs out to the barn; the other I'll be running up through a wall in the kitchen, to attach to a second wireless router for the house.  Our WiFi on the first floor (especially in our bedroom) is kind of shaky, so we're hoping this will fix it.

We took Debbie in for her first treatment with a transdermal steroid patch.  This is designed to attack her patella tendinitis.  The patch contains a battery that uses an electric field to drive the drug down through her skin into the tendon.  The physical therapist there noted that Debbie's extension in her injured leg isn't quite as good as in the uninjured leg, and he's pretty sure that's the root cause of her tendinitis.  We got a bunch of exercises for her to do, all with the objective of improving that extension.  She's hard at work on them already :)
Posted by Unknown at (permalink) 3:40 AM