Paradise ponders...  Yesterday we had a long day of trenching, Tim and I.  We made great progress up until about 2 pm, when progress came to a sudden halt.  Then things got way more exciting than you'd expect from trenching!

What, you may wonder, could possibly happen to make digging a trench exciting?  Why it's very easy!  One merely needs to break a 60 psi gas line – that's all it takes!

That's exactly what we did, even though we did all the right things to avoid doing so.  Tim had had the “blue stakes” folks out to mark where all the electric lines and gas lines were, and we had a nice yellow line painted right across his lawn to show us exactly where that gas line was.  Right where we needed to cross the gas line with the ditch for Tim's new water line, his son Jeff hand-dug a hole down to find the gas line.  He got down to three and a half feet without spotting it, but then could did no more.  So we decided to (very carefully!) dig a larger adjoining hole about two feet deep, safely off to one side of Jeff's hole, so that Jeff could stand in that to dig deeper in his hand-dug hole.  On the second backhoe scoop in that effort, I snagged the gas line and snapped it.  The darned thing was way off to the side from that painted line!

When all the excitement died down later, we measured that distance and discovered that it was 25" from the line to where the pipe actually was.  That's far enough away that the gas company decided this wasn't our fault, and they're not going to charge Tim for the resulting brouhaha.  What brouhaha?  Well...

Right after I snapped the line, I shut the tractor down (not wanting any possibility of igniting the escaping gas).  There were several people right there, and one went off to call the gas company, another called the fire company, and together with another of Tim's sons I tried to figure out a way to stop up that gas line.  We failed in all our attempts: that plastic pipe was so tough that we couldn't squeeze it with any tool we could find, nor could we find anything that would stop it up.  That break was loud – something like standing right next to a jet engine that was running.  When we were trying (very carefully, trust me!) to stop it up, we could scarcely hear ourselves think.  Finally, as the cavalry arrived, we gave up on that effort.  Within a few minutes of those calls, we had firemen (in two pumpers and several auxiliary vehicles) in the yard, a paramedic, two sheriffs, and several gas company employees.  That wasn't the full extent of it, either – four other fire trucks and numerous firemen visited all the houses within an 800 meter (about a half mile) radius of Tim's house and evacuated all those people, too!

The second photo below shows some of the people who were in Tim's house, which got evacuated while the break was still going.  Tim himself is off to the right, making a face for the camera.  The girl in pink is his granddaughter Randi (wouldn't the Brits get a kick out of that name?!?), who was in her Halloween costume.  The border collie mix to the left of her in the photo is Booker, an abused puppy (eight months old) whom she's working to rehabilitate.  The poor thing is terrified of any stranger who happens by.  The little white dog is Lexie, one of Tim's two beloved companions. 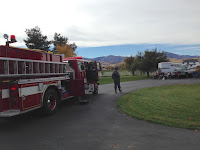 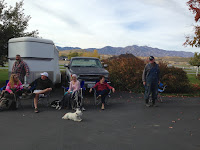 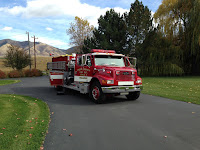 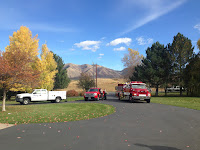 This was substantial overkill for the actual problem, but all the responders were following a documented protocol they have for gas leaks (literally reading it from a manual).  Actual facts on the ground and common sense are, naturally, not part of the equation :)  We had light west winds at the time, blowing the escaping gas to the east – where there was nothing but miles of rolling hay and barley fields, and the foothills of the Wasatch Mountains.  Natural gas is lighter than air, so the escaping gas was over everyone's heads within a few feet of the break.  The odorant that's in the gas is heavier than air, though, so it stays near the ground.  So the only actually dangerous thing around was right at the break itself, where a spark could have caused a big plume of burning gas.

The gas company employee who first responded was a fellow named John who I knew, because he was one of the guys who helped hook up the gas to my shed last fall.  He recognized my tractor (which he and several of the firemen really like :), so he knew I was there somewhere.  John grabbed a shovel and started digging a hole about 15' upstream of the break.  It took him over an hour to find the pipe, because (as we discovered) it was nowhere near the marked line.  Once he'd exposed the pipe, he used a clamping device – much like a gigantic set of vise-grips – to squeeze the pipe and close it off.  Just like that, the noise stopped and the firemen, police, paramedics, and all the other assorted people took off.  Within a couple of minutes it was just us and John.

Then a few minutes later, another gas company employee showed up.  He (Nick) was another of the crew who hooked up my barn last fall, and one that I was particularly friendly with.  He and John went to work to repair the break, and in the process gave us a running commentary on how their patch worked (a very clever bit of engineering, that), just how common these breaks are (several of them every day just in Cache Valley), and how that line was way, way off the mark.  That last thing really surprised us, as we thought the painted line came from actual detection of the pipe underground.  That's certainly how it worked when the Blue Stakes folks marked the gas lines around my house last year, and their lines were within an inch or two of where the pipe actually was.  But Nick told us that if the pipe was installed before 1974 (which Tim's was, and mine wasn't), then the pipe would not have a wire running along it.  The Blue Stakes guys therefore have no way to actually detect it.  So how did they decide where to paint the line?  They did it by looking at drawings made by the gas crew that installed the line, and measuring.  No wonder there was an error!  There's no way to know how accurately the actual installation followed the drawing, plus there's plenty of room for error in how the Blue Stakes folks measured.  Tim and I felt much better about our own actions after learning how far off the line was, and that it wasn't detected in the first place.  It would have been very nice to have been informed about this, which we made clear to a Blue Stakes representative who was on site.

Well, after all that it was getting on toward dark, and Tim and I were pretty darned tired.  So we wrapped up for the day, installing a tarp over the hole around the well casing (as we're expecting several days of rain), cleaning up the tools, etc.  It was good to have some routine, calm time after the preceding several hours of pure chaos :)

I'm still tired this morning, but I can tell I'll be all right by tomorrow...

Posted by Unknown at (permalink) 8:31 AM