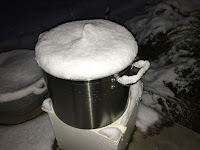 That stock pot at right is what we brined our turkey in, and that's what it looked like just before I brought it in at 7 am this morning.  The snow looks all nice and fluffy, but it wasn't – it was basically ice with a little air mixed in to make it white.  When I got the pot inside, I couldn't remove the lid – it was frozen in place.  I had to wedge a knife between the lid and the pot, and pry quite hard.  Then I had to melt the ice off the lid with hot water.  This should have given me a clue what I was going to run into when I went outside to plow, but I'm too dense, so it didn't. 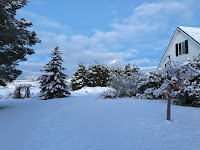 At daybreak I went outside to plow the driveway.  The good news: this year, with the tractor in the (nice, heated) shed, it started right up.  I didn't have to melt the ice in the ignition switch like I did last year :)  The bad news: the driveway was basically solid ice, with a weird icy snow on top.  I slipped and slid all over the place while walking, and the tractor did the same while I was plowing.  The tractor actually slid right off the driveway three times, and it was quite a challenge to get it back onto the driveway!  I had to use the differential locks and approach the driveway straight on.  The plow got the snow off easily, but had a lot of trouble with the sheet of ice that's right on the pavement.  Probably 50% of the driveway is still covered with ice, but with the snow scraped off the pavement is showing through.  This means that the sun will heat the black asphalt, and the ice will melt soon (if the snow remained on top, it wouldn't).

After I finished plowing, I shoveled off our front porch and walkway.  Normally that's trivially easy – we don't get much snow in the first place, and it's been light, fluffy stuff in all our previous storms.  Not this time!  In some places I really needed a jackhammer –  that solid ice was not possible to shovel off.  So I did the best I could, and then spread quite a bit of salt.  I even put salt on the part of the driveway we'd walk on to get to the trucks, because I don't want Debbie slipping again.

After coming back inside, I helped Debbie with the cranberry-orange relish and potatoes.  Debbie already had the turkey stuffed and in the oven.  We're due for our dinner in about four hours.  Counting down, we are!