Paradise projects: the next one... 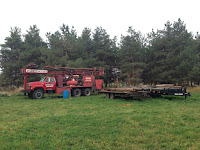 Paradise projects: the next one...  We've been waiting quite a long while for this project to get started – getting a well drilled on the parcel that has our shed on it.  This well is mostly a backup in case something happens to our spring.  The well water won't be nearly as good as the spring water, but it should be far more reliable.  My plan is to run the well feed into the shed, set up a water conditioning system (softening and iron removal) there, along with a cistern (probably 1,000 gallons), secondary pump, and pressure tank.  I'll use the water in the barn and its surrounding landscaping, but mainly it will be there as backup for the spring.  To make that work, I'll have a bit of plumbing done so that I can switch the use of the pipe between feeding the shed from the house and vice versa.  Then if anything ever does go wrong with the spring (or its associated cistern and pump), I can just flip a few valves and get water from the well.

Several of my neighbors recommended the well driller – one Elray Westlake of Preston, Idaho.  Most of these neighbors had had bad experiences with one or another of the other local drillers (Preston is just a few miles north of Logan; we're quite close to the Idaho border here, so Elray is really still local).  Of Elray, though, everybody had only good things to say.

I first contacted Elray in September of 2014, just over a year ago.  He had quite a big backlog of work as the local construction industry was shaking off the recession.  I told him my requirements weren't urgent, and he should just keep me in mind the next time he had his rig down near Paradise.  About six weeks ago, he contacted me and said he'd soon be ready to start.  We've talked a few times since then – he's quite a character, very entertaining to talk with – and yesterday he called to say he was ready to go.  Sometime today he drove his rig over, along with a couple of trailers full of casing pipe.  You can see all that in the photo above, where he's parked along the north side of our little pine forest.  The well is going in just behind the drilling rig.  On Monday the work begins!
Posted by Unknown at (permalink) 4:43 PM