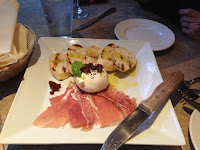 Paradise ponders...  The snap at right is the appetizer Debbie and I shared last night, starting another fine dinner at Le Nonne's.  This was only our second meal ever there, and we were wondering if the repeat would be as good as the first time.  We needn't have worried!

The appetizer was homemade Italian bread with garlicky olive oil and herbs, a garnishing dominated by dried tomatoes, a burrata (fresh mozzarella stuffed with mozzarella curds and cream), and several slices of a fine prosciutto.  We were amused by the giant knife, suitable for felling trees – but the appetizer itself was heavenly.  My entree was veal ravioli in a truffle sauce, topped with slices of black truffle; Debbie's was penne pasta in marinara, with spicy, sausage-y meatballs.  Both were superb; the ravioli right up there with the best I've ever had (which was in Italy!).  For dessert (the least wonderful part of our last meal) we tried the lemon cake – and it was just as good as the rest of the meal.  The cake was light and delicious, the lemon filling evocative of fresh lemons (though not quite as tart as we'd like it), and the accompanying strawberry puree and fresh strawberry the perfect companion.  Last time we had creme brulee; I guess the Italians just don't know how to make that French dish :)  A memorable meal!  Two visits now, and we still haven't ordered anything that was actually on the menu.  Both times the waitress listed specials that enticed us...

Last night I got an email from our solar supplier.  They're planning to start installation on Thursday morning (tomorrow!).  We have rain in the forecast, though, so I've got a question into them about whether they really want to be installing stuff on a slippery metal roof in the rain :)

And speaking of forecasts ... we have snow in the forecast for early next week, and several days of high temperatures in the 40s.  Winter is fast approaching!

This morning I'm catching up on our finances.  Mainly that means entering receipts into Moneydance (the financial management program we use).  We're about to start doing something we've never done before: keep separate accounts for the household (which I do) and for Debbie's spending.  This is in an effort to split the workload, and also to have the person doing the work be the one who actually incurred the expense – we've noticed that this makes handling the inevitable errors in reconciliation much easier :)  One of the things I did this morning was something that's now become a habit: scanning in all the paperwork involved: receipts, bills, medical paperwork, etc.  I started doing this just this past January.  At this point I have just over 1,000 documents in the electronic storage – and the original paper has all been shredded.  No more file cabinets and shoe-boxes full of receipts!  The search facility to find documents in that electronic storage is still just as zippy as it was in the very beginning, and I use it quite often.  We used to cringe every time a situation came up that required us to find a piece of paper.  Now it's as easy as using Google, because the user interface is just like Google's.  This morning I searched for two things: "Paradise irrigation" and a tradesman's name.  In both cases, the search responded in well under a second, and the document I was looking for was in the first 2 or 3 results.  One click and an image of the document is right there on the screen in front of me.  Our paper shredder (a big one) is nearly full for the first time since we bought it last December – all of those more than 1,000 documents are in there.  Lovely, that is!

Today I'm headed up to Newton with our realtor for a meeting with several people concerning the property adjacent to the cabin we're buying for my brother.  That property – 4.5 acres of hay field and hillside – abuts the cabin's property to its west.  It was just listed for sale (although it's been for sale by the owner for over a year) with no “bites”; the owner is eager to sell and the price is attractive.  Other than its convenient location, it comes with one other very attractive feature: a share of irrigation water rights.  We're thinking that if we were to combine it with the cabin's property we'd end up with the cabin on 10 acres, highway frontage nearly level with the cabin (the cabin's current access a long driveway off a back road), a couple acres of almost-flat field (where the hay currently is), and 3 acre-feet of water per year (that's what the irrigation water right conveys).  That's a pretty sweet setup for anyone who wants a place in the boonies, where they can grow something.  Adding to that is the fact that the hillside included all faces south to southwest – perfect for growing things in a warmer micro-climate than the flat field would provide.  The meeting today is to nail down all the particulars, including (especially!) the water rights.  The big unknown for me is how the irrigation water gets to the parcel, though I already know there is a way, as it was irrigated this year for hay.
Posted by Unknown at (permalink) 3:06 AM