Paradise ponders...  Earlier this week, Michelle H. (the wonderful woman who cleans our house for us, but who is fast becoming a good friend) invited Debbie to a “salsa social” put on by Paradise Ward 2's Relief Society.  Paradise Ward 2 is the area (including our home) of one congregation of the Paradise LDS (Mormon) church.  This particular Relief Society is the same group of women who insisted on feeding us earlier this year, shortly after Debbie was injured.

Last night was the evening of the salsa social, and Michelle picked Debbie up at 6:30 and took her there and back.  It was held at the home of Pam and Paul N.; Paul was the preceding bishop of the ward, just after Tim D. (our neighbor to the north), less than a mile from our house.  Debbie came back all smiley and happy – she had a wonderful time meeting a bunch (20 or 25) of the local women.  She reports that they were all very friendly, eager to get to know her (it's not every day there's a new face in town!).  As she told them, it was really nice for her to hear women's conversation, instead of just that with the slug she married :)

I went out this morning to check in with Elray (the well driller) to see what his progress is.  He's got the hole bored down to 90', has 45' of 10" casing down (this will later form the basis for the 40' of "seal" required around every new well), and about to start putting the first 90' of casing down the hole.  In the first two photos below, you can see the "sticks" he's just finished pulling out of the hole.  The 10" diameter drill bit (the working end of which is in the last photo) is still in the hole at that point, but held up at the very top.  You can also see the "mud" (hydrated clay) that has been drilled, puddled in the foreground.  There's quite a pile of mud there, and when I commented on that Elray told me that when the mud is loosened and hydrated, it expands – sometimes considerably, by a factor of several times the volume.  Who knew that dirt swelled up?  The third photo shows the end of a pile of seven 20' lengths of 6" diameter casing.  Elray will be welding these into a single pipe as he inserts the casing down the hole.  It's fascinating to watch him work on this, especially when he has to move heavy things around – that rig and his skill makes it look really easy.  I watched him extract the 10" drill bit this morning.  It's a piece of steel about 7' long overall, weighing well over 200 lbs.  Elray lifted it out with a hoist, then swung it around like a giant pendulum until the working end was swinging over the spot where he wanted to lay it on the ground, then at precisely the right moment he dropped the lift down and placed it within inches of where he told me he would.  He never had to work hard for that whole job... 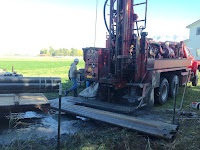 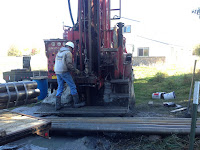 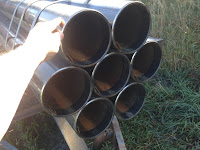 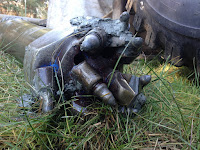