Paradise ponders...  We took our walk yesterday at noon, under a partly cloudy sky.  The ground was still damp and slightly muddy from the rains, so we kept to the roads and avoided tromping over the sodden fields.  The dogs were disappointed by this, as that meant less voles to sniff out.  Still, the high humidity brought exciting aromas to their noses, and both of them were noses down the whole time we were walking.  We saw a few hawks circling high, but none perched around the fields.  They must have reduced the vole population to the point where they have to work harder to find one.  It was only 50°F during our walk; light jacket weather even though we were working hard.  Some photos: 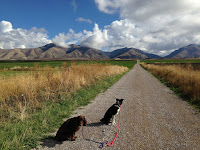 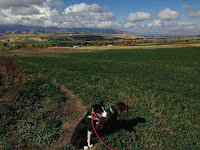 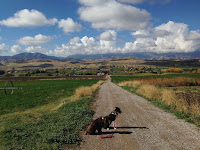 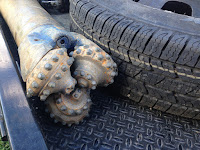 Debbie had physical therapy in the morning, and I worked indoors where I could stay warm.  Elray had to stay home in the morning to wait for two truckloads of casing pipe to arrive (some of which is for us!); he didn't get here until too late in the afternoon to start drilling.  The next step for him is to expand the hole he's got now from 6" to 10" in diameter.  That's so he can put a temporary 10" casing down the first 40' or so of the well.  That will provide enough room for him to put the water connection in, 6' or so underground (to prevent it from freezing).  When he's all done with the well, he'll pull that 10" casing out.  A reader wrote yesterday to ask what the drill bit actually looks like.  That's what the photo at right is: the 6" rotary drill that he used to drill the hole we've got so far.  Those knobby “cones” rotate against the bottom as the drill shaft is turned.  Because the shaft itself is heavy, plus there's a big weight on top of it (several tons), those pointy knobs are grinding into the bottom of the well, breaking loose bits of soil and rock as they go.  Between the top two cones you can see a small hole; that's one of three air ports that blast out a huge amount of compressed air to blow the debris back up the hole.  There's also a bit of water injected in there, about 500 gallons per day, mainly to keep it from creating too much dust.  The water also acts as a lubricant, but that doesn't matter too much unless you're drilling through rock.  Elray tells me that those rotary drills were invented by Howard Hughes – not that Howard Hughes, but his father.  That's how he made his original fortune. 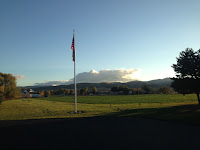 Debbie and I had lunch at Elements, a restaurant on the southern end of Logan that gets high rankings in the snooty restaurant magazines and web sites.  We'd only been to it once before; we liked it but were not all that impressed by it.  Yesterday we decided to give it another try, and we're very glad we did – both of us had really nice meals.  Debbie had an outstanding spinach salad and a barbecue chicken pizza (she's a big fan of these; me, not so much) that she pronounced wonderful.  I had a tomato bisque (good, not great; a little sweet for my taste), and a very different sort of fish and chips.  That's what they called it on the menu, but it really was Alaskan cod cooked tempura-style, and mashed sweet potato baked with a cinnamony, slightly sweet crust on top.  The cod was melt-in-your-mouth good, better than any I've had in many years.  The tempura was perfectly done; a very light coating of batter and very little oil.   And the sweet potato just might have been the best sweet potato dish I've ever had.  Debbie, somehow, had enough room for dessert: key lime pie.  I didn't even taste it, but she reports it was mouth-puckeringly tart, just the way she likes it, and reeking of lime.  I almost left out the part of the meal that surprised us the most: flavored lemonades.  When you order one, you get one free refill.  We both started with raspberry, and at the first sip our brains just about fell out on the table.  Wonderful stuff!  Tart as hell with the lemon, but with a lot of raspberry puree swizzled in.  Naturally we both took our refills.  Debbie tried the strawberry, and was equally delighted with it.  I tried the mango, and it was just as wonderful as the raspberry.  We'll be going back there...

The photo above has nothing to do with the restaurant :)  It's the view to the southwest of our driveway entrance, as the sun was about to disappear behind the Wellsville Mountains...
Posted by Unknown at (permalink) 4:55 AM