Paradise ponders...  I had quite the busy day yesterday, working with Tyler (the generator guy).  Early in the morning I headed up to Thomas Petroleum (where I bought the propane tanks), with the mission of exchanging the regulator I'd bought the day before for a new one with lower output pressure.  That turned into a very educational experience for me – these regulators are more complicated than they appear at first blush.  Working with an engineer there, we figured out that for our situation we actually needed two regulators (see second photo below): a primary (the red one) and a secondary (the green one).  The most unexpected discovery to me is that a single regulator stage can't reduce the pressure from the roughly 200 PSI of the tank to the roughly 1/2 PSI that the generator needs.  That 400:1 reduction is beyond the capability of these diaphragm-based mechanical regulators.  We need two regulator stages, each reducing the pressure by about 20:1, to get that kind of overall reduction.  There are two-stage regulators in a single package, but they can't produce the volume of gas needed by the generator – so we had to get two individual regulators, each fairly large, to do the trick.  I now know way more about gas regulator systems than I ever wanted to know as a result of this exercise :)

Because we needed two separate regulators, the plumbing as originally constructed wouldn't work.  I gave Tyler a call to let him know the bad news, and we figured what would be needed to get the plumbing right, and gave the plumbers a call.  Tyler came to the house a short while later, finished the last of the wiring (you can see this work in next-to-last photo – that's a lot of really big wire crammed in there!), and then it was time to give it a try.  This time it fired right up.  It works ever so much better when the engine is getting fuel!  Then Tyler did a little bit of clean-up work, removed the forms from the slab he'd poured on Tuesday, and he was done.  We're now fully backed up, both house and shed.  Yay!

Overall I'd unhesitatingly recommend Tyler and the Golden Spike Electric crew to anyone who needs a generator.  They were wonderful to work with, accommodating to our needs, and did a job far better than I know how to do.  They're also just plain nice folks, the kind I'd like to have over for dinner sometime... 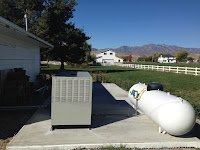 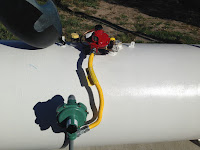 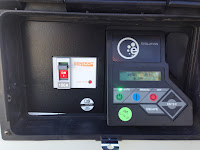 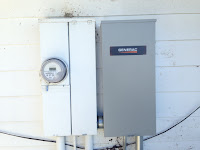 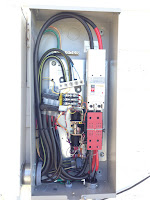 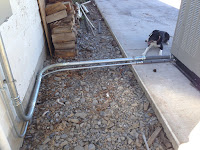 This morning Debbie and I left at the first blush of dawn to go wildlife viewing in Hardware Ranch and Ant Flats.  We had a spectacularly successful outing!  First up was a group of deer: a doe, a yearling, and a young buck.  It's a little unusual to see a buck in a group like that, so we speculate that it was that doe's two-year old son.  We watched them mosey down the mountain from our left, cross the road right in front of us, and head down to the river on the right.  A little further down the road, we saw an osprey stoop toward the river, just opposite us, and pull back just before hitting the water.  Then we watched him fly around, including directly overhead at perhaps 30' of altitude.  Great osprey viewing!  After he flew away, we headed out toward ant flats and stopped to look at the trout – and I spotted a dipper headed down the stream toward us.  This little fellow perched on a large rock in the middle of the stream and spent the next ten minutes posing for us.  That was by far the best view of an American Dipper we've ever had.  We continued for a mile or so on Ant Flat Road, then headed back to Hardware Ranch to see if we could see some elk.  None of them were in view, but on the way out we spotted a kingfisher perched high on a twig, not above the stream where we usually see them.  We stopped, fully expecting him to take off (as they generally do), but this one changed perches a few times until settling on a thick fence post, then did a slow 360° turn as if posing for us!  We were able to watch him continuously for over five minutes, while he was fully sunlit, and from every angle.  Great!  Finally, as we headed back down the canyon toward Hyrum, we spotted a pair of northern harriers, near the road, hunting over a large meadow while being harassed by a group of crows.  We had exceptionally good viewing of their low-altitude, slow-speed hunting – fully showing off their agile flying.

Near Hardware Ranch there's a water bubbler, no longer working, that memorializes one A. J. Peterson, who had something to do with the establishment of the big game unit at Hardware Ranch.  I couldn't find out much about him online, and nothing definitive. 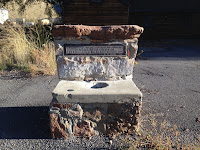 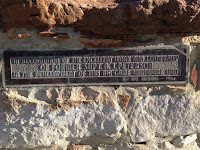 When we got done we decided to repair to Crumb Brothers for breakfast.  That was, of course, wonderful (croque madam for me, chocolate biscotti for Debbie). Next up is a grocery run, and Debbie is going to make us some Ora King salmon for dinner.  That's some mighty fine eating for us today!
Posted by Unknown at (permalink) 11:19 AM