Paradise ponders...  Yesterday afternoon, as planned, we headed out to Blacksmith Fork canyon to gawk at fall color and wildlife.  The color was great again, though it's starting to fade already at the higher altitudes.  This time most of the really good color was right on the canyon bottom.  We didn't see all that much wildlife, perhaps because the canyon was so full of people.  Partly that was because it was a weekend, and partly its because there was still quite a large fire crew mopping up from a Friday afternoon fire that burned a few acres just north of the road.  We suspect a cigarette started it, or perhaps some sparks.  In any case, the fire had burned across sparse fuel, uphill and downwind from the road.  The damage, compared with chaparral fires, was trivial – the burned area will be green again in spring.  The crew was surprisingly large for the size of the fire; clearly they have fire-fighting resources here.  There were roughly 50 men, 20 vehicles of various sorts, plus a helicopter – far more assets than would have been deployed on the mopping-up phase of a fire like this in southern California.  I'm curious what assets were here when they were actually fighting it!

We did have one interesting wildlife spotting: a pair of northern harriers (female in the photo above right, not mine, alas).  What first caught our attention was that they were perching on the ground – very odd behavior for a hawk.  My first theory was that they were migrants, and ordinarily lived on the tundra where there were no trees.  Wrong theory – these raptors are just crazy and like to perch where they're very vulnerable, on the ground.  They're incredibly agile flyers for their size, hunting near the ground and performing aerial stunts every few seconds.  This was one of the easiest-to-identify raptors I've ever run into, mostly thanks to that distinctive white band on its tail... 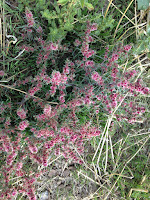 This morning we slept in very late for us, and we didn't go for our walk until the sun was well up and it was fairly warm.  The dogs didn't care, but I was sweating :)  The fields are starting to look like fall, so the little bit of color on the ground (at right) really caught my eye.  I've no idea what it is, and it was the only one I saw in a half-mile of marching across the dry hay field.
Posted by Unknown at (permalink) 10:32 AM