Morning (so far) in Paradise... 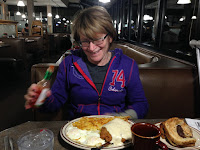 Morning (so far) in Paradise...  We got up bright and early this morning, at 3:30 am, so that we could get Debbie back to the ER.  This time it wasn't really an emergency; they asked us to go back 24 hours after the last visit, to follow up on her infection treatment.  It seems to be going very well – the swelling and rash on her wrist are way down from yesterday, and almost back to normal.  The doc at the ER prescribed another round of IV antibiotics, then said we should play it by ear tomorrow morning.  If all looks and feels well with her wrist, we'll just keep her on the oral antibiotics; otherwise, we'll take her back into the ER again tomorrow morning.  Debbie is very happy to have the IV port removed from her arm this morning.  It was bugging the heck out of her all day yesterday and last night.

The photo at right above is Debbie smiling after the ER appointment, and just after the waitress delivered her chicken-fried steak and eggs breakfast at Angie's.  I had a ham, mushroom, and cheese omelet.  Now we're both in an Angie's coma.  In fact, Debbie is taking a nap :)  I'm going to work at my desk for an hour or so, then take the doggers on a walkie. 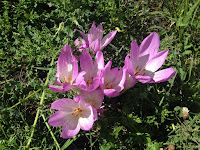 Yesterday we headed down to Ogden so that Debbie could interview a hairdresser.  She's not happy with the one she located in Logan, and found this one through Yelp reviews.  The interview went well, and she's made an appointment for later in the month.  Afterwards we had lunch at Tona, the best sushi we've found in Utah.  It's only the second time we've been there, as it's quite a ways from home, but it was a great treat.

When we got home in the afternoon, the first thing we spotted outside our house was the crocus at left.  That splash of color really stands out in the fall!
Posted by Unknown at (permalink) 6:15 AM