Morning in Paradise...  We had a lovely day yesterday.  We went grocery shopping, and then went to the Aggie's Creamery (part of the Utah State University) and got an ice cream cone.  Sugar cones with one scoop of chocolate and one scoop of espresso chip.  They were brains-fall-out good.  Several locals have recommended the creamery to us, but this was the first time we'd actually made it there.  Dang, that was good!

Which reminds me...  The Crumb Brothers that we so mourned when they went out of business six months ago has been resurrected!  A buyer was found, most of the old employees rehired, and the reopening is just a week away.  Woo hoo!

After returning from shopping and ice cream eating, Debbie and I made chicken and dumpling soup.  We modified a recipe we'd tried last week – adding mushrooms – and the result was a huge success.  We gorged ourselves on it in the afternoon, and put five one-meal containers in the refrigerator. 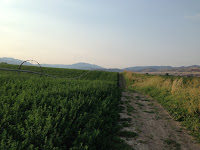 This morning, the boys (Miki and Race) and I did our usual morning walk.  It was slightly overcast, but nice and cool.  For some reason we saw very few hawks today, which is kind of weird.  The dogs got terrifically excited at one point, but I never saw the reason why.  Most likely they smelled something enticing; perhaps a raccoon or a woodchuck.

Just a little while ago, I reheated a container of chicken and dumpling soup for my lunch.  I made some more dumpling batter and dropped it in the pot, as there are never enough dumplings :)  As usual, the soup was even better the second day...
Posted by Unknown at (permalink) 10:50 AM