An evening in Paradise...

An evening in Paradise...  Our evening started off very nicely, with a trip up Blacksmith Fork canyon to Hardware Ranch, to see the fall color (some photos from that ride below).  This drive was actually a lot prettier than the drive up Logan Canyon yesterday, and it is a lot easier here to drive slowly or stop in order to gawk properly.  Incidentally, all of these photos are taken on my iPhone 5 in the rain – something a 35mm camera would be challenged with unless you happened to have a rain hood. 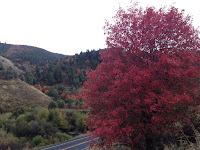 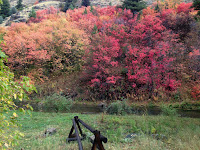 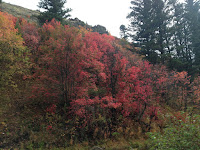 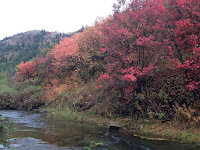 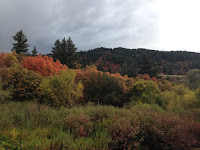 After we returned from this drive, Debbie's left hand started to get quite painful.  The day before one of our cats (Koa) had bitten her left thumb.  This happened when Debbie tried to retrieve (from his throat!) a piece of plastic that he'd swallowed.  Last night the pain from the bite reached the point where Debbie felt like she needed to go to the emergency room.  So off we went, for another late night ER experience.  When we were called into a room, we noticed that the ER was very busy, with a knot of people outside one of the rooms in particular.  We saw sad, worried faces at first, and much urgency.  The ER staff was largely tied up dealing with this, and we waited for over two hours before Debbie was examined and treated.  Meanwhile, things must have gotten better in the room that was in focus – people leaving the room started looking less worried, then unworried, and finally, smiling.  We found out today that the person being treated was the woman in this story – an accidental gunshot victim.  Debbie got two injections last night: tetanus and a powerful antibiotic.  Now she's on a 10 day regimen of antibiotics, and hopefully that will be the end of it.  Next time (if there is a next time) one of us gets bitten by a cat, we're going straight to the ER...
Posted by Unknown at (permalink) 10:02 AM