Afternoon in Paradise...  This morning I found out that the trees we've ordered will be here next Tuesday.  Those trees include three fairly large weeping willows, five quite large paper birches, six lilacs, and 25 sumacs in five gallon pots.  That means we need some holes dug :)  This afternoon I dug the holes for the three willows, four feet across and two feet deep.  Tomorrow I'll tackle the birches.

The big, beautiful field of alfalfa east of us is being mowed today (first three photos below).  Two machines – the same two I posted photos of a few days ago – were making quick work of it.  When I took the two photos of the mower in action, I was surprised to see that the driver was a young woman, perhaps 19 or 20 years old.  When she saw me taking photos, I got a big smile and a friendly wave.  I really shouldn't be surprised to see that, as it's quite normal here for the girls and women on farms to do the much of the same work as the men.  The only areas that seem to be “male only” are those that genuinely need the muscles, such as moving hand line around.  Anyway, she was whipping that monster machine around like an expert!

The last photo is something you should all be jealous of.  It's two tomatoes from my neighbor's (Tim D.) garden, cleaned and chopped, and a nice dollop of Duke's mayonnaise.  That's some mighty fine eating, let me tell you! 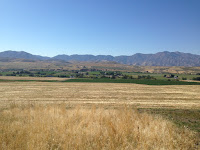 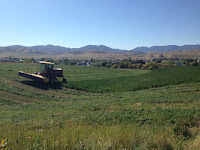 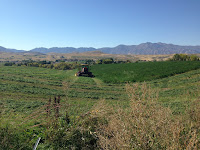 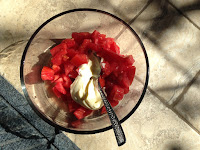 Posted by Unknown at (permalink) 2:39 PM