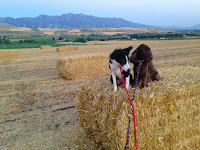 Vole Paradise Lost...  Miki, Race, and I were back to our usual walk this morning, as the smoke from California (that place haunts us even here!) is greatly diminished.  I couldn't smell that wet campfire smell at all this morning, and the Wellsville Mountains looked almost normal in the pre-dawn light, as you can see in the background of the photo at right.  There's still a bit of haze, but not enough to keep us indoors.

The major change we saw on today's walk is that the fields of barley have all been harvested, and their stalks cut and baled for straw.  Aside from the obvious visual aspect (all those beautiful stalks of barley gone!), several hundred acres of prime vole habitat have just disappeared.  Voles are not our favorite pest, so we're quite ok with that :)  The dogs were reveling in the newly exposed voles – as the fat voles waddled from place to place wondering what the hell happened to them, the dogs practically pulled me across the fields trying to get to them.  Race actually did get one, by darting from the road into the edge of the field, snapping up a vole, crushing it and swallowing it before I could even say “No!”.  That dog is fast!  He looked quite satisfied with himself when he was finished swallowing.

On the way back down I spotted some motion off to our right, in a clump of sunflowers.  Neither dog saw a thing.  It was a big striped skunk, and he was not inclined to tolerate our presence.  As he stamped his little skunk feet and pouted, I skedaddled on down the road before he decided to make me a target!

Birds of various kinds have taken ownership of these barley fields.  Sparrows and goldfinches were scavenging uncollected barley grains.  Crows and magpies were doing the same, but they also appeared to be interested in the voles scampering around for cover.  Each big field had several hawks perched around them, and we saw two hawks guarding kills – one vole and one weasel.  We also saw a lone, confused seagull walking around as if to ask the other birds “What are you all so excited about?  I don’t see anything here...”

It sure felt good to be out walking again...

My friend and neighbor Tim D. called us last night, just as we were tucking ourselves into bed.  He's doing volunteer work at the Logan Temple early this morning (he has to be there at 4 am), and that meant he wouldn't be able to move his hand lines (irrigation) this morning.  You could tell he was embarrassed to ask, but he wanted to know if I'd be willing to shut off the water for him, so nothing got over-watered.  I told him I'd move the hand lines for him, and naturally he tried to talk me out of it.  This, from the guy who spent a good part of last fall helping me dig trenches!
Posted by Unknown at (permalink) 6:27 AM