Just another day in Paradise...

Just another day in Paradise...  Debbie and I had a lovely day today.  We went to Herm's for breakfast.  I had their “Florentine Benedict” (poached eggs on tomato and spinach, on thin grilled English muffins totally drowned in Hollandaise sauce) and Debbie had southwestern steak and eggs.  The cook nailed Debbie's request for having the steak charred on the outside and “warm” on the inside. 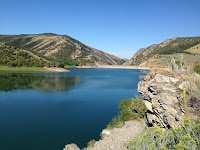 Then we took a drive down to Porcupine Reservoir (13 minutes from home), which feeds our irrigation water.  I took this photo from about halfway along the north side of the reservoir.  It appears to be about 15' below full, which is better than average for this date.  In other words, we have plenty of irrigation water.

I talked this morning with a solar power company, from whom I had requested a proposal.  The proposal is for a supplemental solar system, producing enough power for the entire house (and selling some back) in all seasons other than summer, and enough to knock down the cost of running the air conditioner (about half our total electricity bill all by itself!) to zero.  If we get the sizing right, that means we'd have an average monthly electrical bill of about $40, and it would be zero except for three months in the summer.  The proposal came in substantially less than I was expecting (when Federal and state rebates are figured in), so there's a good chance we're going to move forward with it.  We want some features that are going to cost us a bit more, so the proposal is being reworked – but I'm not expecting a substantial change.  The biggest feature we want is to have the panels mounted on our shed roof instead of on the house; that basically just requires some underground wiring to be done.

One feature of the inverter being proposed (a SolarEdge SE6000) I found quite interesting.  Their inverter has the ability to monitor each individual solar panel, even when they're wired together in “strings” as they usually are (because the higher voltage of a series arrangement increases the voltage and decreases the gauge of wire required).  They do this with a widget they call an “optimizer” that goes on each panel.  These monitor the voltage and current being contributed by that panel in real time.  The communications between the optimizers and the inverter are through a serial channel, so there's relatively little wiring required for all those optimizers.  Clever, these Aussies (SolarEdge is an Australian company)!

Next up for us was grocery shopping at Macey's.  Our shopping list was unusually big, because Debbie is feeling the urge to start cooking again (after 75 days away from the kitchen!).  I felt like I was shopping for an army :)  When I staggered up to the checkout counter, the clerk was the daughter of one of our neighbors: Azure S.  She still lives with her folks (whose animals are in the photo below), but is soon to travel to South Korea for her mission.  Azure, when she checked me out, was astonished at how much food I'd purchased (she's checked me out several times these past few months).  When I explained to her that Debbie was ready to start cooking again, though, it made instant sense to her :) 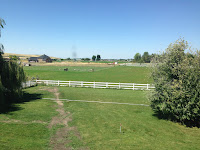 Later today we saw the animals belonging to one of our neighbors being let out into their newly-fenced pasture.  These critters have been living in a tiny paddock for nearly a year, but now have an acre of lovely green pasture to spend some time in each day.  They all love it, but Annabelle (the cow) is the most demonstrative of the bunch.  She practically dances for joy when let out of the paddock.  This photo was taken out our office window, from the second floor of our house – those animals are quite close to us (and even closer to our shed).

We love living out here!
Posted by Unknown at (permalink) 3:09 PM